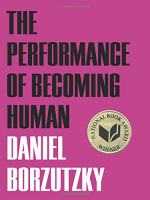 Daniel Borzutzky
This Study Guide consists of approximately 33 pages of chapter summaries, quotes, character analysis, themes, and more - everything you need to sharpen your knowledge of The Performance of Becoming Human.

The Performance of Becoming Human Summary & Study Guide includes comprehensive information and analysis to help you understand the book. This study guide contains the following sections:

This detailed literature summary also contains Quotes and a Free Quiz on The Performance of Becoming Human by Daniel Borzutzky.

The following version of this book was used to create the guide: Borzutsky, Daniel. The Performance of Becoming Human. Brooklyn Arts Press, 2016.

The Performance of Becoming Human begins with the poem “Let Light Shine Out of Darkness.” Here, the speaker addresses his body (referred to as “you”) and sets out his aim to “carve,” through writing, “a space, with light,” in which his body can freely breath, move, and expresses itself in color: “I said: I think I need for something blue or green to shine / From my rib cage / Other times when I am talking about lightness I am talking / about breath and space and movement” (11). The speaker recognizes, however, that his poetic aim faces a primary difficulty: that “it is hard to move in a body so congested with images of mutilation" (11).

This difficulty never recedes from view as the book progresses. From “Let the Shine Out of Darkness” on, recurring “images of mutilation” indeed stuff every poem in "The Performance of Becoming Human." The fragmented, abused, mutilated condition of the speaker’s body thus mirrors the fragmented, abused, mutilated condition of the text’s body. Tracking the continued reemergence of “the rotten carcass economy” from its initial appearance in “In the Blazing Cities of Your Rotten Carcass Mouth,” to “The Gross and Borderless Body,” to “The Private World,” and finally, to its climactic modulation into “your rotten carcass mouth” in “The Mountain at the End of this Book,” raises the question as to whether the speaker can ever succeed in his aim to let light into his body, and, by extension, whether poetry can let light into the modern world.

The speaker possesses a degree of ironic self-awareness, which manifests itself in his mockery of a normative aesthetic ideology which assumes that brutal political realities can be alleviated through artistic representation. “In the Blazing Cities of Your Carcass Mouth” ironically redeploys the facile terminology and tenor of “creative writing” exercises in order to call attention to the ways in which artists fail to acknowledge their participation in the corrupt systems they set out to describe: “This poem would be better with just the right amount of sex, / alcohol, violence, and 1950s border-noir” (20). This Hollywood-style approach to poetry reappears as the object of the speaker’s derision in “The Mountain at the End of This Book,” a poem in which the speaker’s alienation from his own body is figured as the “privatizing of our form and content” (87). As a poet, the speaker grapples with the appalling fact that poets have long contributed to extinguishing light, and obstinately refuses the conventional trappings of poetic form as a result.

The only tools at the ethical poet’s disposal are thus “images of mutilation” and the will to compulsively, and repeatedly, re-write these images into the body of the text: “This mountain appears in every book I have ever written. / Sorry if you were expecting something new.” (“The Mountain at the End of This Book,” 83). Through repetition, the speaker puts extreme pressure on “the rotten carcass economy” and other recurring “images of mutilation” in order to draw the reader’s attention to those responsible for the body’s alienation from itself. The enemies of the body include, on the macro level, the nation-state as figured in Chicago and Chile: “it is often said on the shores of Lake Michigan, which is the / Bay of Valparaiso, that we will die for reasons we do not / understand” (“Lake Michigan Merges into the Bay of Valparaiso, Chile,” 76). On the micro level, the speaker singles out the Chicago police and other local appendages of state power in “Memories of My Overdevelopment” and “The Privatized Waters of Dawn”; bureaucrats, psychologists, and administrators, whose work the speaker characterizes as “data fascism” in “Archive,” also figure as nefarious forces contributing to the mutilation and privatization of the body and its world.

The question as to whether the speaker successfully lets light back in to his body is perhaps answered mid-way through The Performance of Becoming Human in the poem “A Broken Testimony.” The speaker confesses that there is “a beat behind this writing, a nervous tap” figuring as the sound of “a body trying to move forward” (64). The body’s movement, however, is blocked by its own “insistence on movement / The performance of stasis played backward” (64). The modern body, always already broken, can only move in broken movement—that is, backwards. The speaker’s poems, as figurative symptoms of this broken movement, only testify to their own postmodern condition. The "Performance of Becoming Human," then, stands as “the broken testimony of the broken beat” (64). Borzutsky seeks to dispel the illusion that political art moves us forward in a revolutionary overcoming of the present regime of power. Political poetry only moves us further backwards into a sharper awareness of the forces working to extinguish light.

More summaries and resources for teaching or studying The Performance of Becoming Human.

The Performance of Becoming Human from BookRags. (c)2022 BookRags, Inc. All rights reserved.