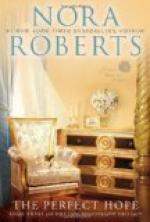 Nora Roberts
This Study Guide consists of approximately 32 pages of chapter summaries, quotes, character analysis, themes, and more - everything you need to sharpen your knowledge of The Perfect Hope: Book Three of the Inn BoonsBoro Trilogy.

This detailed literature summary also contains Topics for Discussion on The Perfect Hope: Book Three of the Inn BoonsBoro Trilogy by Nora Roberts.

Hope Beaumont is the innkeeper at Inn Boonsboro, a bed and breakfast in the small Maryland town of Boonsboro. She is highly detail-oriented which makes her perfect for the job. The inn is owned by Justine Montgomery's family. Her three sons include Owen, Beck, and Ryder. Hope's two best friends live in town as well, Avery, who is engaged to Owen, and Clare, who is married to Beck and expecting twins. Hope has another friend as well, a ghost named Eliza Ford who is an ancestor of Hope's family. Eliza lives where she died - at the Inn. She has been dead since 1862. She was waiting at the inn for her finance to return from the Civil War. Her fiancé was Billy Ryder, an ancestor of the Montgomery family.

Hope moved to Boonsboro to escape the memories of a bad love affair only to realize she hadn't really been in love at all. She is happy as the innkeeper and the one dark spot in her life is Ryder Montgomery, who never calls her anything but "innkeeper" and seems to dislike her. In truth, Ryder is attracted to Hope and hates that.

Ryder is a hard working man who is devoted to his friends and family. He is also aware of Eliza's presence, but has not grown close to the ghost like some of the family members. When Hope calls on him because of a malfunctioning light, he points out that he can't stop Eliza from messing around with the lights. When they get locked in a room together, Ryder is angry but Hope points out that Eliza enjoys matchmaking and will probably release them if they kiss. That kiss begins a relationship and both Hope and Ryder fully expect they will have sex for as long as it interests them both, then amicably go their separate ways. What happens instead is that they fall in love.

As Hope and Ryder seek to sort out their muddled emotions, the lives of their friends and family move on. Avery is planning to open a new restaurant and she and Owen are planning to marry. Clare is expecting twins boys which will make them a family of five. Justine is in a romantic relationship with Willy B., Avery's father, but tells him she's more inclined to keep their relationship as it is rather than taking a step into marriage. Meanwhile, Hope and the others continue their research into the life of Eliza with the hope they'll identify her finance. They have no illusions that he's dead but want to figure out the details on the chance that it will give Eliza peace. They discover he died and Antietam on one of the bloodiest days of the Civil War, and that his dying thoughts were of Eliza.

More summaries and resources for teaching or studying The Perfect Hope: Book Three of the Inn BoonsBoro Trilogy.

The Perfect Hope: Book Three of the Inn BoonsBoro Trilogy from Gale. ©2005-2006 Thomson Gale, a part of the Thomson Corporation. All rights reserved.