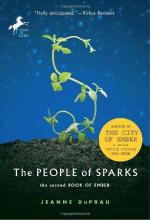 The People of Sparks Summary & Study Guide includes comprehensive information and analysis to help you understand the book. This study guide contains the following sections:

This detailed literature summary also contains Topics for Discussion on The People of Sparks by Jeanne DuPrau.

The People of Sparks is a sequel to The City of Ember and tells the continuing story of the citizens of the dead underground city of Ember as they emerge to the surface of a post-apocalyptic Earth and try to make their way with the help of the people of a village called Sparks.

Led by the young teenagers Doon Harrow and Lina Mayfleet, the 400 citizens of Ember walk several days after climbing from the cave where Ember was located. Tired and hungry, they come across an agricultural village called Sparks, which agrees to take in the Emberites for a time and provide them with food.

Lina, her guardian Mrs. Murdo, and her young sister, Poppy, who is ill, are sent to stay at the home of Dr. Hester and her young nephew, Torren, who resents the newcomers. Meanwhile Doon and his father go to stay with the bulk of the Emberites who have been put up in an large abandoned hotel building.

The Emberites learn from the people of Sparks that several generations before the world had been afflicted by widespread disease and war, leaving the largest cities abandoned in ruins. A few settlements existed like Sparks, with wanderers traveling from place to place scavenging abandoned buildings and trading items.

Lina believes that the people of Ember are perhaps destined to re-inhabit one of these abandoned cities and she secretly stows away with a traveler headed for one of the cities. She abandons her dream when she sees the extent of the ruination.

Lina is gone for several weeks. She returns to find that in the meantime tensions between the people of Sparks and Ember have come to a head. The people of Sparks grow resentful of having to share their food stores with the Emberites, and the Emberites, who provide work in exchange for the food, begin to feel they are being mistreated. When Doon is wrongly blamed for destroying some crates of tomatoes, he begins to sympathize with the growing group of Emberites following a young man named Tick, who advocates fighting the people of Sparks and taking over their food supply.

When a few anonymous pranks are played on the Emberites, the sore feelings explode and the two peoples confront one another in the village square. When the hostilities result in an accidental fire, Doon and Lina lead their fellow Emberites in helping the people of Sparks save their village and both sides learn that working together they can get along. Tick is exposed as the one who played the pranks against his own people in an effort to incite them to fight. The novel ends on an optimistic note as Doon, following the diagram in an old book and using materials scavenged by travelers, creates a simple generator that will power a light bulb.