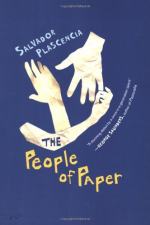 Salvador Plascencia
This Study Guide consists of approximately 86 pages of chapter summaries, quotes, character analysis, themes, and more - everything you need to sharpen your knowledge of The People of Paper.

The People of Paper Summary & Study Guide includes comprehensive information and analysis to help you understand the book. This study guide contains the following sections:

This detailed literature summary also contains Quotes and a Free Quiz on The People of Paper by Salvador Plascencia.

This novel is written with a prominent stylistic emphasis on “magic realism,” a style of narrative in which “magical” elements are integrated into a story grounded in realistic characters, situations, and events, but are not regarded as anything unusual – in other words, in works of “magic realism,” magic is a part of an otherwise “normal” reality. Thus, when protagonist Federico leaves Mexico for a new life in America with his daughter, encounters everything from a baby that can tell the future, mechanical tortoises, and a co-worker who spits both blood and flower petals when he is beaten, both Federico and the reader simply accept these events as part of the experience of living.

What Federico cannot, and will not, accept is the growing and deepening sense that he and his life are being watched and controlled. Initially, he is unable to identify the force that he believes is shaping his life; eventually, though, he comes to believe and/or understand that it is, in fact, not only the giant planet Saturn, but the god Saturn, an ancient, paternal entity for whom the planet is named and who, according to Federico, lives in the sky.

As Federico’s feelings of resentment and anger towards Saturn become both more resentful and more rebellious, he gathers a small army of followers who, in their own ways, have experiences that fall into the realm of “magic realism” and who, like Federico, wish to free themselves of Saturn’s influence. These followers include Froggy (the aforementioned co-worker who spat flower petals); Julieta (who, narration suggests, caused the destruction of her home town simply by crumbling a bullion cube); and Smiley, whose curiosity about Saturn leads him on a journey into the sky. That journey ends with Smiley tearing a hole in the sky, going through, and discovering that Saturn is, in fact, a writer named Salvador Plascencia, who is having some struggles in his personal life; who feels the resentment and anger of Federico and the other characters he has created; and who doesn’t want to give up his control of those characters, but at the same time doesn’t want to fight with them. Smiley returns to the world he (as a character) inhabits with a sense of empathy for the writer and a determination to no longer antagonize him as part of Federico’s rebellion.

While all this is going on, the book also explores the experiences of several other characters, some more related than others to the central story. There is a woman made of paper (Merced de Papel), whose very active sexual life comes to an end when she is killed in an accident; the man who loved her (Ramon Barretto), who nurses chronic paper cuts; the mysterious Baby Nostradamus, to whose perceptions of time and space and reality mean nothing; Cameroon, addicted to the poison in bee stings; Little Merced, Federico’s daughter who is addicted to limes; and a saintly wrestler, a folk doctor whose mother was accidentally burned by the halo of the visiting Virgin Mary, a philosophical Mechanic, and a Cardinal of the Roman Catholic church whose ministry is defined by his experience of loving an exotic, wise, and insightful woman. All these characters and stories interact and entwine, creating a complex, colorful tapestry of magic and mystery that eventually resolves in a sense of peaceful independence and freedom for all.

More summaries and resources for teaching or studying The People of Paper.

The People of Paper from BookRags. (c)2022 BookRags, Inc. All rights reserved.