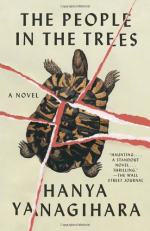 The People in the Trees Summary & Study Guide

Hanya Yanagihara
This Study Guide consists of approximately 65 pages of chapter summaries, quotes, character analysis, themes, and more - everything you need to sharpen your knowledge of The People in the Trees.

The People in the Trees Summary & Study Guide Description

The People in the Trees Summary & Study Guide includes comprehensive information and analysis to help you understand the book. This study guide contains the following sections:

This detailed literature summary also contains Quotes and a Free Quiz on The People in the Trees by Hanya Yanagihara.

The following version of this book was used to create this study guide: The People in the Trees, by Hanya Yanagihara. Doubleday, 2013.

The book begins with a pair of newspaper articles that place Perina at the center of legal investigations into his behavior with his children. These articles are followed by a prologue written by Dr. Kubodera, explaining the origins of the material about to follow. That material begins in Part 1, as Perina describes his troubled childhood (including the origins of the complicated relationship he has with his brother); his discovery of science as a calling and career path; and the progress of both his education and his actual work. That work, he writes, became tied to that of anthropologist Paul Tallent, who asked Perina to accompany him on an expedition to the remote island of Ivu’ivu, where Tallent planned to investigate the legend of how certain of the island’s inhabitants apparently became virtually immortal.

When the research team arrived on the island, according to Perina, they spent several weeks traveling through the jungle to get to its sole village. On their journey, they encountered a woman in excellent physical condition but psychologically close to being entirely dysfunctional. The scientists gave her the nickname Eve, making a deliberate connection to the first woman in the Bible, and came to believe that she could be of the same sort of immortality referred to in the legend. When the team arrived at the village, and as Tallent continued his research, Perina fulfilled his assigned duties while making close observations of his own. His research, combined with his observations of a series of village rituals (including the ritual sodomizing of young men, initiating them into manhood), led him to draw connections between the ritual consumption of a particular kind of turtle; the elimination of the physical aging process in those who undergo that ritual; and the subsequent psycho-social deterioration of those same people.

Eventually, Perina writes, he and the other researchers left the island, taking with them some of those experiencing “immortality” (nicknamed “the dreamers”) and Perina, unknown to the others, taking with him examples of the turtle. Back in America, as observations continued on the dreamers, Perina conducted experiments on the turtles, and discovered there was, indeed, a link between consumption of the turtle and “immortality.” Publication of those discoveries resulted in Perina becoming famous and eventually winning a Nobel Prize, but losing the friendship of Tallent, who mysteriously disappeared. Meanwhile, as both the turtles and the people of Ivu’ivu became exploited and overrun, Perina developed a habit of adopting / rescuing children from the island and bringing them home to be raised.

As the results of Perina’s research brought him first more fame and later rejection (when other scientists discover the deterioration of those deemed “immortal”), he became more and more personally reclusive while, at the same time, adopting more and more children in an attempt to recapture a connection that he felt with a child on the island. Eventually, one of his adoptees rebelled beyond a point that Perina could tolerate, and an explosive confrontation eventually resulted in the arrest and conviction referred to at the novel’s beginning.

Perina’s narration concludes with contemplations of what it feels like in prison, but the book does not end there: there are, in fact, a pair of epilogues. The first is a brief narration by Dr. Kubodera of how he helped Perina skip out on his parole from prison; the second is a passage from Perina’s writings previously omitted by Kubodera, one in which Perina reveals that the conflict with his adopted child ended with Perina sodomizing that child (a son) in the same way as the boys in the village were – and, finally, saying that he loved the boy.

More summaries and resources for teaching or studying The People in the Trees.

The People in the Trees from BookRags. (c)2022 BookRags, Inc. All rights reserved.