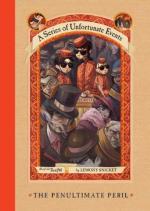 Lemony Snicket
This Study Guide consists of approximately 35 pages of chapter summaries, quotes, character analysis, themes, and more - everything you need to sharpen your knowledge of The Penultimate Peril.

This detailed literature summary also contains Topics for Discussion on The Penultimate Peril by Lemony Snicket.

The Penultimate Peril is the twelfth book in the thirteen-book Series of Unfortunate Events series. In this book, the Baudelaire orphans are sent to work at Hotel Denouement to uncover which of the guests are working for the V.F.D. and which are working against them.

This novel picks up exactly where the eleventh book left off, with the Baudelaire orphans in the back of a taxi driven by a pregnant stranger. This woman, Kit Snicket, claims to have worked with the Baudelaires' deceased parents and she sends the children on their first mission for the V.F.D. working as concierges in the Hotel Denouement to discover which guests are working for the V.F.D. and which guests are working against the organization. They also want to discover the true identity of the mysterious J.S. and discover the location of the sugarbowl, a most treasured artifact for the V.F.D. and its enemies. All the members of the V.F.D. are scheduled to arrive at Hotel Denouement by Thursday for a very important meeting and the Baudelaires are sent to make sure the hotel is still a safe meeting place. If not, they are ordered to send a sign to the organization saying that their last safe place is safe no longer.

To further complicate matters, the Baudelaires will be working with the hotel managers, identical twins Frank and Ernest Denouement. One twin is evil and the other is good, but no one can tell which is which. It is vital that the children keep their identities secret, lest they risk revealing their location to the enemies, including Count Olaf, who hunts them doggedly. On their first day at the hotel, the Baudelaires are overwhelmed by the amount of villains they see, including various villains from previous books in the series. Everywhere they go, the children take copious notes trying to discover who among them can be trusted. The hotel manages also send the children on strange errands - that may be for the benefit of the V.F.D. and may be for the benefit of their enemies - including handing sticky birdpaper to the rooftop and locking a Vernacularly Fastening Door in the laundry room.

On their second day at the hotel, a third manager is revealed: Dewey Denouement, the third Denouement triplet. Dewey has organized all of the V.F.D.'s information about the villains and he plans to present this information at the upcoming trial, which is the true nature of Thursday's meeting. When Count Olaf suddenly appears, the threatens Dewey with a harpoon gun, demanding the code for unlocking the Vernacularly Fastened Door, where he is sure the sugar bowl is being held. In their attempt to save Dewey, the Baudelaire children accidentally fire Olaf's harpoon gun, and Dewey is fatally wounded. The Baudelaires are put on trial for murder the next morning, but the trial cannot be completed as Count Olaf kidnaps the judge to use as a hostage to demand that the Vernacularly Fastened Door be opened. Down in the laundry room, the Baudelaire children unexpectedly decide to help Count Olaf escape the hotel because they know he won't be able to find the sugar bowl and that they will be able to escape beside him and Sunny sets Hotel Denouement ablaze as a sign to the V.F.D. that the building is no longer safe for their Thursday meeting. At the close of the novel, the children find themselves adrift in a boat beside their archenemy, Count Olaf.

More summaries and resources for teaching or studying The Penultimate Peril.