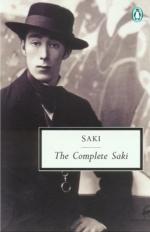 Saki
This Study Guide consists of approximately 36 pages of chapter summaries, quotes, character analysis, themes, and more - everything you need to sharpen your knowledge of The Penguin Complete Saki.

Describe Reginald. What is known about his tastes? Describe his actions in at least three situations. What are the indications that he is self-absorbed?

What is "the square egg?" How does the author come to be aware of this phenomenon? What does he say he plans to do about it? Describe at least two other stories in this section.

What is "the brogue?" What is the situation that arises over the selling of this creature? Compare this to what happens when the Baroness sells a hyena in the story "Esme." Which of the two stories is more realistic? Why?

Who is Francesca Bassington? Who is Comus Bassington? The title of the story refers to the "unbearable" Bassington. To which is the title referring? Support your answer.

Who is Prince Dimitri? He is faced with three threats of death in a single evening. List the...

More summaries and resources for teaching or studying The Penguin Complete Saki.