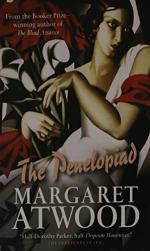 Margaret Atwood
This Study Guide consists of approximately 44 pages of chapter summaries, quotes, character analysis, themes, and more - everything you need to sharpen your knowledge of The Penelopiad.

The Penelopiad Summary & Study Guide includes comprehensive information and analysis to help you understand the book. This study guide contains the following sections:

This detailed literature summary also contains Quotes and a Free Quiz on The Penelopiad by Margaret Atwood.

The following version of this book was used to create the guide: Atwood, Margaret. The Penelopiad. O.W. Toad Ltd., 2005.

In The Penelopiad, Penelope introduces herself as the narrator of her own story. After centuries of hearing Odysseus's version of events in Ithaca, she is determined to clarify the tale. She feels Odysseus tricked her for years, and she chose not to see his deceptions an lies. Though she has no body and no mouth in her present underworld reality, she hopes her audience will be able to heed her advice and avoid repeating her mistakes.

The 12 maids who lived alongside and served Penelope and the Ithaca court sing poetically - yet cryptically - about their hated mistress and unfortunate deaths.

Penelope then describes her childhood in Sparta. When she was but a child, her father Icarius attempted drowning her to presumably reverse a prophesy. Yet, as the daughter of a Naiad, or water nymph, Penelope was saved by a flock of ducks. Centuries later, she still cannot understand why exactly her father tried to kill her. Because of Icarius's bizarre cruelty and her mother's distant demeanor, Penelope learned self-reliance early.

The maids sing about their own childhoods. Born to peasants, slaves, and serfs, the 12 girls' fates were decided for them. Sent to Ithaca as helpless children, they seemed designed to fulfill a role as objects, playthings, and manipulative devices.

Penelope describes the perpetual darkness of life in Hades. The only place she can find a reprieve from the torment of the underworld is in the fields of white asphodel fields; however, after centuries of drifting, event the fields bore her. One of the other opportunities for spirits to escape Hades is through summonings and conjurings. Visiting the living also bores Penelope, as she believes their troubles are petty and the games of the magicians are embarrassing. Whereas the living rarely call upon Penelope, they frequently ask for Helen, as she is still rumored to be the most beautiful woman.

When Penelope was 15, Icarius hosted a marital ceremony. The man who won the game would also win Penelope's hand and the riches of her dowry. Through a series of deceptions, Odysseus championed the game; he and Penelope married shortly thereafter. Contrary to tradition, he then took her back to his home in Ithaca along with her dowry.

The maids sing a mocking tune about Penelope's marriage to Odysseus and her subsequent trip to Sparta. The stanzas make fun of Penelope's reliance on Odysseus to grant her a new life.

While the boat trip was taxing, Penelope was excited for her new life away from Sparta. Yet life in Ithaca proved difficult, as neither Odysseus's parents nor his servants seemed to approve of Penelope. Eurycleia, Odysseus's childhood nurse, was particularly unkind, assuring Penelope her sole responsibility was to produce an heir. After Telemachus was born, Penelope hoped Odysseus would be less distracted; yet he only seems proud of her because she beat Helen to birthing an heir.

The maids sing about their arrival in Ithaca shortly after Telemachus's birth. They were only sent to the island to act as playthings for the new prince. Their song laments their ignorance regarding Telemachus's ultimate involvement in their deaths. They wish they had killed him when he was a child, but admit they do not know if they could have committed the deed. They declare that even they do not know their own hearts.

A year after Telemachus's birth, Odysseus and Penelope learned of Helen's disappearance to Troy with Paris. Determined to recover his wife, Menelaus invoked Odysseus's assistance. Much to Penelope's chagrin, Odysseus ventured out in pursuit of her philandering cousin.

Over the next 10 years, Penelope waited in Ithaca without Odysseus. She heard word of his adventures through the traveling minstrels. The tales told of Odysseus's near escapes from death, encounters with giants, and affairs with goddesses. Though she listened to all of the rumors, Penelope was reluctant to believe most of them. More years continued to pass without Odysseus's return. His mother died and his father left for the countryside. Penelope assumed control of the kingdom, learning the ways of a ruler.

The maids then sing about all of Odysseus's seafaring explorations and shenanigans; their chorus confirms all of Penelope's longtime fears about her husband's whereabouts and activities.

When Penelope encounters a former Suitor, Antinous, in the asphodel, she asks him why he and the other Suitors behaved so poorly during Odysseus's absence from Ithaca. Antinous tells her they saw the advantage in marrying her, a famous and wealthy widow. Penelope already knew this, having heard word of the Suitors conversations through her maids. The Suitors were a group of men who stormed the Ithaca court while Odysseus was away. Because they believed Odysseus dead, the men thought they could secure Penelope's hand and therefore assume control of the kingdom.

When their behaviors became increasingly aggressive, Penelope devised a plan to stave off their advances. She told the men after she was finished weaving her father-in-law's funeral shroud, she would choose a new husband. However, every night, she and her 12 chosen maids would unwind everything she had woven during the day. Though she loved her maids, Penelope knew one of them betrayed her and reported their secret activity to the Suitors. The Suitors were furious and raped the maidens.

Distressed, Penelope considered marrying one of the men or returning to Sparta. Telemachus discounted both plans and disappeared in search of his father.

The maids sing about their perpetual restlessness, saying the only reprieve they can find, both past and present, is through sleep.

Telemachus returned safely to Ithaca, telling his mother tales of his adventures. Not long after, Odysseus returned to Ithaca disguised as a beggar. Penelope and Telemachus played along with his game and pretended not to know him. He observed the activities of the Suitors, and eventually agreed when Penelope suggested a plan to secure their departure. Together they staged a competition for Penelope's hand; whoever could shoot Odysseus's divinely-gifted bow, could marry the widow. Odysseus won, as he was the only man who could accomplish the feat.

Penelope then tells the reader that none of the rumors regarding her infidelity are true.

The maids perform a drama reenacting Eurycleia and Penelope's supposed plan to blame the court's disorder on the maids. They believe the two women accused them of disloyalty, and therefore orchestrated their execution.

Penelope encounters Helen on her way to the bath. The women argue over who has had more men killed in her name.

While Penelope was sleeping, Odysseus and Telemachus went on a murder spree, slaying all of the Suitors and hanging the 12 maids.

The maids give an anthropology lecture in Hades, attempt to prove their distinct identities outside that of literary archetypal patterns. They give up, however, when their audience fails to understand their lesson.

When Penelope woke up she was horrified to find her husband and son had killed her 12 maids. For a moment, she even thought the man who had returned might not have been her husband at all. After Odysseus did reveal himself, the two shared their bed again, exchanging tales of their schemes and tricks while they were apart. Penelope's reestablished faith in and affection for her husband, however, was disappointed not long later, when Odysseus insisted he must leave Ithaca once more.

Odysseus is put on trial in Hades for the murders he committed. Despite Penelope and the maids' testimonies against him, the judge sides with Odysseus and dismisses his case. He feels murdering the maids is an insignificant crime, and Odysseus's flawless record should not be tainted with it.

Penelope grows tired of life in Hades. Though she knows she could drink from the Waters of Forgetfulness, like Helen and Odysseus, and live a series of new and different lives on earth, she is disinterested. After how much she suffered in her first life, she fears reincarnation would only cause her more pain and suffering. She believes Odysseus only leaves so often because the maids refuse to stop tormenting him. Indeed, they tell Penelope the unkindness they show Odysseus will never be enough to make up for what he did to them.

The maids then sing to Odysseus, a haunting chorus which attempts to remind their murderer of their continued presence. Their voices then begin to fade, drifting off and assuming the flight and form of owls.

More summaries and resources for teaching or studying The Penelopiad.

The Penelopiad from BookRags. (c)2022 BookRags, Inc. All rights reserved.