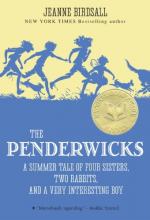 Jeanne Birdsall
This Study Guide consists of approximately 73 pages of chapter summaries, quotes, character analysis, themes, and more - everything you need to sharpen your knowledge of The Penderwicks.

The Penderwicks Summary & Study Guide includes comprehensive information and analysis to help you understand the book. This study guide contains the following sections:

This detailed literature summary also contains Quotes and a Free Quiz on The Penderwicks by Jeanne Birdsall.

The Penderwicks is a story about four young girls and their father who vacation for the first time in a cottage on an estate called Arundel Hall which is located in the Berkshire Mountains. Though this wasn't their usual vacation destination, it would be the center of conversations for years to come. The children range in age from Batty who is just four years old to Rosalind who is twelve. Jane and Skye are ten and eleven respectively, and they are joined by Hound Penderwick - something that was not revealed to the owner of the estate, Mrs. Tifton.

Mrs. Tifton is a social climber of sorts whose biggest concern throughout this story is whether or not she will win the Garden Club competition. Sadly for her, an unfortunate event with the Penderwicks and her son will cause her to lose first place to a rival. Mrs. Tifton has one son, Jeffrey, who dreams of going to a conservatory to study music. That seems impossible however as his life has been planned to the final detail. Mrs. Tifton is determined to have Jeffrey attend a military school and follow in his grandfather's footsteps to West Point afterward. The thought makes Jeffrey cringe. Mrs. Tifton isn't thrilled with the impact that the Penderwick sisters are having on her son. Though usually quiet and respectful of his mother's wishes, Jeffrey has stepped up to defend the girls against her and even openly defied her wishes in favor of helping the sisters.

Cagney is the gardener for Arundel Estate and is tasked with creating something so remarkable that Mrs. Tifton will win the Garden Club Competition. Housekeeper Mrs. Church is a woman of many talents. When Jeffrey befriends the Penderwick sisters, she encourages him to invite them to his birthday party. Since the affair is formal, Jeffrey thinks they will decline, but Churchie has an answer for that problem too. She takes the girls up to the attic and allows them to select a dress of their choice from the myriad of dresses outgrown by Mrs. Tifton as she grew up. Churchie reveals yet another talent when she offers to alter the dresses to fit each of the girls, including young Batty. Though the birthday dinner is a disaster, and referred to as the worst birthday ever by Jeffrey and the girls, the Penderwick girls have a definite influence on Jeffrey, encouraging him to talk to his mother and explain how he really feels.

As the Garden Club competition nears, Mrs. Tifton is increasingly anxious, and determined that this will be the year she wins. Rosalind lectures her sisters repeatedly to stay away from Arundel and its grounds on the day of the competition, but that sets the stage for misadventure. Deeply invested in a game of soccer, Skye, Jane and Jeffrey are giving everything they have when the ball winds up in the garden. The children follow in hot pursuit, mindless of where they are until they realize they are not alone. The Garden Club judge is amused and understanding but Mrs. Tifton is barely controlled as the girls head back to the cottage.

The sisters are worried about Jeffrey's fate, and just when they decide to go and check on him, he shows up on their doorstep and tells them he is running away from home. He plans to go to Boston to finish school there and possibly attend the school of music there as well. The girls talk him into spending the night, and in the morning Mrs. Tifton shows up early looking for him. Jeffrey finally stands up to his mother and tells her what he really wants and she finally relents. By encouraging him, the Penderwick girls have helped to alter the course of Jeffrey's life for the better. By the time their vacation is over, Mrs. Tifton is relieved to see that the ordeal is finally over, but the girls will miss their new friends, and promises to visit are made.

More summaries and resources for teaching or studying The Penderwicks.

The Penderwicks from BookRags. (c)2022 BookRags, Inc. All rights reserved.