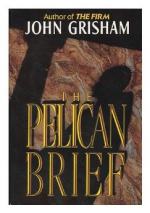 John Grisham
This Study Guide consists of approximately 52 pages of chapter summaries, quotes, character analysis, themes, and more - everything you need to sharpen your knowledge of The Pelican Brief.

This detailed literature summary also contains Topics for Discussion and a Free Quiz on The Pelican Brief by John Grisham.

After a consummate professional assassinates two Supreme Court justices, the surviving justices, the FBI, the CIA, the White House, a law professor in New Orleans, and his beautiful, brilliant student/lover, look for a motive. Darby Shaw discovers the link, which she describes in the "pelican brief," which kills those who know about it, but is ultimately published and brings the mighty down.

Two of nine Supreme Court Justices refuse FBI bodyguards and are murdered within hours of one another—crippled, cantankerous old Rosenberg in his bed and young Jensen in a gay porno theater. The White House is overjoyed at the prospect of filling two seats before the general election when Democrats might prevail and thwart an ideological takeover by the right. The Court and constitutional law scholars play amateur sleuth. Law student Darby Shaw looks for who might most benefit and produces what becomes known as the "pelican brief." She rejects her own thesis, but boyfriend/professor Thomas Callahan takes it to his old friend, Gavin Verheek, Special Counsel to FBI Director Voyles, who passes it upstairs until it reaches the White House and spawns paranoia. This deepens when Washington Post reporter Gray Grantham publishes an insider tip naming two potential nominees. His article also inspires an anonymous call from a frightened lawyer claiming inside information about the murders. The President authorizes a CIA investigation, freezing out the FBI.

Within 24 hours of the brief reaching Washington, someone blows up Callahan but misses Shaw. She flees, phones Verheek, but refuses FBI protection. The CIA finds her easily and debates taking her into protective custody. Verheek comes to New Orleans for the funeral and to find and protect Shaw, while in Washington, Grantham publishes a planted story about the terrorist Khamel, and falls under surveillance. Garcia stops calling and Grantham looks for him, needle-in-a-haystack fashion. In New Orleans, Shaw survives another murder attempt, phones Grantham, and arranges to meet Verheek, not knowing that Khamel is about to impersonate him. When he dies before her eyes, Shaw flees New Orleans for New York

Verheek's death motivates Voyles to disobey the White House and the FBI and CIA ally. Grantham comes to New York, begins falling in love with Shaw, and learns details about the pelican brief, which he sells to his editors: Victor Mattiece is determined to squash tiny Green Fund's federal lawsuit; it means enough to him financially to remove two environmentalists from the bench. Reporter and law student investigate effectively, but Grantham holds off writing until he can name Mattiece, which requires finding Garcia. When the White House dispatches someone to confront Mattiece, he admits the assassinations, but kills the messenger. They learn Garcia's identity, but he is dead. His widow allows Shaw to impersonates her to obtain an affidavit and videotape, which they rush to the Post. The editors and corporate lawyer agree it is damning proof of the story. Those implicated are allowed to comment. Voyles alone does and offers to help brave Shaw run and escape her nightmare. In the Caribbean, Shaw recovers emotionally and when Grantham shows up, they agree to live together month-by-month.

More summaries and resources for teaching or studying The Pelican Brief.