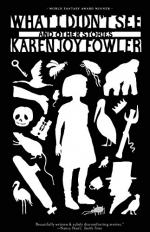 Related Topics
We Are All Completely Beside Ourselves
Sarah Canary
Booth

Karen Joy Fowler
This Study Guide consists of approximately 23 pages of chapter summaries, quotes, character analysis, themes, and more - everything you need to sharpen your knowledge of The Pelican Bar.

This detailed literature summary also contains Quotes and a Free Quiz on The Pelican Bar by Karen Joy Fowler.

The following version of this story was used to create this study guide: Joy Fowler, Karen. “The Pelican Bar.” What I Didn’t See. Northampton: Small Beer Press, 2010. Pages 1 – 18.

The story opens on the 15th birthday of the protagonist, Norah. Norah is generally unruly and unkind towards her parents, and her parents threatened not to have a party or presents for Norah’s birthday. Norah is therefore surprised when her parents do in fact throw a party for her and give her several presents. That night, Norah secretly spends time with her friends and takes drugs with them. The next morning, a mysterious man and woman arrive and force Norah out of the house. Norah’s parents watch and say that Norah is being sent somewhere for Norah’s own good.

The man and woman bring Norah to an old motel that has been converted into some type of facility. They leave Norah there with no belongings. The person who runs the facility is a large, elderly woman called Mama Strong. Norah is placed into a group of ten other girls. Norah is denied basic necessities and says that she can earn them by earning points in exchange for obedience and for reporting on other girls. Living conditions at the facility are terrible, and the girls are consistently malnourished. Mama Strong fosters an atmosphere of fear, desperation, and betrayal among the girls. Mama Strong and the facility employees also use physical torture in order to enforce obedience among the girls.

In addition, the facility utilizes various methods designed to break down the girls’ individual wills and identities. Mama Strong enforces exercises of self-hatred and mutual emotional abuse among the girls. Mama Strong also forces the girls to reveal everything about themselves, especially painful secrets and memories. Norah decides that the only way to resist is to acquire a new secret. Norah’s parents never visit her in the facility, but they do send a postcard from a nearby restaurant called the Pelican Bar. Norah decides that the Pelican Bar will be her new secret. Mama Strong senses that Norah has a secret, and she tries to force it out of Norah, but Norah resists.

Norah is kept in the facility for three years. The facility employees send false letters from Norah to her parents in order to trick the parents that Norah is doing well and that the facility is a good place. Norah’s parents are generally happier without her. Norah is released on her 18th birthday, as she is a legal adult and cannot be held against her will. Norah is given $50 in cash before she leaves. She spends in on clothes and on a meal at the Pelican Bar. She does not know what she will do next. She does not expect to see her parents ever again. She clings to the hope that some strangers may help her. However, when she encounters Mama Strong by chance, Mama Strong states her view that humans are evil.

More summaries and resources for teaching or studying The Pelican Bar.