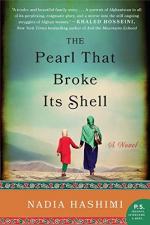 The Pearl That Broke Its Shell - Chapters 22 - 28 Summary & Analysis

Nadia Hashimi
This Study Guide consists of approximately 99 pages of chapter summaries, quotes, character analysis, themes, and more - everything you need to sharpen your knowledge of The Pearl That Broke Its Shell.

In Chapter 22, Shekiba is brought to Arg-e-Shahi, more commonly referred to as Arg, the king's palace. As she is being prepared for cleansing, Shekiba remembers seeing Kabul on her ride to the palace. She sees Kabul as a place so large she never could have imagined it. She notices the streets lined with stores, houses with colorful doors, and people acknowledging the king's entourage as it passes through the city.

Shekiba is equally impressed with the palace. She notices the high arches, stone pillars, grand entrance, and stark greenery. Soldiers guard every corner. She sees the king from a distance and wonders if her path will ever cross his, since the palace grounds are so enormous.

Shekiba meets Ghafoor and is happily surprised that...

More summaries and resources for teaching or studying The Pearl That Broke Its Shell.

The Pearl That Broke Its Shell from BookRags. (c)2022 BookRags, Inc. All rights reserved.