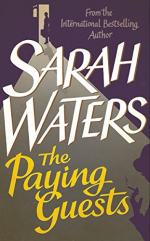 Sarah Waters
This Study Guide consists of approximately 53 pages of chapter summaries, quotes, character analysis, themes, and more - everything you need to sharpen your knowledge of The Paying Guests.

This detailed literature summary also contains Quotes and a Free Quiz on The Paying Guests by Sarah Waters.

Frances Wray is a young woman living on the outskirts of London in 1922. Her father has died, leaving Frances and her mother to live as best they can in the large family home. Soon after his death, France discovers they are in serious financial trouble and she comes up with the idea of taking in boarders as a means of making ends meet. She accepts a young couple, Lilian and Leonard Barber, who make use of several rooms upstairs. The rooms have been outfitted so that the Barbers have their own kitchen, bedroom, and sitting room. The two families share the “water closet” outside and the room with the bathtub.

Frances is a lesbian and was deeply in love with a young woman named Chrissy. She broke off her affair with Chrissy when her parents discovered the situation. Frances and Chrissy remain friends and Frances hides their friendship from her mother.

Frances' mother is very proper and Frances tries to follow her mother's dictates. There are some things that have changed. Because of the financial situation, Frances takes care of all the duties once attended by servants. Her mother is embarrassed by this and Frances tries to handle the heaviest and most demeaning chores while her mother is away. Frances and her mother are not certain what is proper in their interactions with the Barbers but Frances eventually finds that she is romantically attracted to Lilian. She and Lilian begin a sexual affair and their love grows to the point that they are struggling to keep it hidden.

Meanwhile, Leonard Barber is having an affair with a young woman named Billie. Lilian discovers this about the same time she learns that she is expecting a baby. She doesn't tell Frances about Leonard's affair but does tell her about the pregnancy. She assures Frances that she knows how to go about aborting the baby and promises that she will leave Leonard as soon as the abortion is complete. Frances reluctantly agrees to help Lllian and she obtains the pills necessary for the abortion.

Lilian's abortion occurs while Leonard is away from home and she and Frances are filled with plans for the life they plan to build together. Then Leonard arrives home and it's obvious he is in a bad mood. He had planned to spend the evening with a good friend, Charles, but said Charles had given up on the evening too quickly. Leonard picks an argument with Frances and Lilian, leading Frances to confess about their love affair.

Leonard attacks Frances, strangling her. Frances is unable to free herself until she hears a cracking sound just as Leonard goes limp. She rises to discover that Lilian has hit Leonard over the head with a heavy ash tray, and that Leonard is obviously near death.

Frances suggests they call the police but Lilian urges her to find some other option, saying that people will believe she killed him on purpose. What she doesn't say is that Leonard has a large insurance policy. Frances allows Lilian to persuade her and she decides that they must take Leonard's body outside, then stage it to look like an accident. They get the body to a nearby lane and pose him, then rush back inside where Frances tries to clean up traces of the struggle and the blood.

Leonard's body is found the next morning but police don't believe it's an accident. The focus of the investigation turns on Leonard's friend, Charles, leaving Frances and Lilian wondering what they should do next. Each considers turning themselves in but neither does. The investigation then turns to a young man believed to be jealous of Leonard's affair with Billie. There is a trial and Frances fully expects the young man to be found guilty. She knows if that happens, she'll have to turn herself in.

The young man is found not guilty after all. Frances and Lilian meet a distance from the courthouse and ponder the situation. Their relationship has undergone many changes. Frances is no longer certain that Lilian's love for her was ever real but wonders if they might find happiness after all.

More summaries and resources for teaching or studying The Paying Guests.