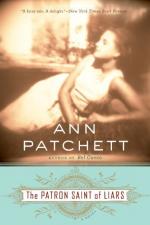 Ann Patchett
This Study Guide consists of approximately 39 pages of chapter summaries, quotes, character analysis, themes, and more - everything you need to sharpen your knowledge of The Patron Saint of Liars.

The Patron Saint of Liars Summary & Study Guide includes comprehensive information and analysis to help you understand the book. This study guide contains the following sections:

This detailed literature summary also contains Topics for Discussion and a Free Quiz on The Patron Saint of Liars by Ann Patchett.

The Patron Saint of Liars is the first novel by Ann Patchett. In this novel, Rose is a beautiful woman who cannot find contentment in long term relationships. Rose marries a good man, but when she learns she is pregnant she cannot imagine the life that will unfold if she tells her husband. Rose arranges to go to a home for unwed mothers and leaves without telling her husband she is pregnant. At this home, Rose decides she wants to keep her baby so she marries another man she does not love. Rose works hard in the kitchen of the home as her daughter grows up in the care of the same unwed mothers who have come to give up their own children. When the past catches up with Rose, she runs again, leaving behind all she has created here, including her child. The Patron Saint of Liars is a novel of selfishness, of love, and of the mysteries that drive us all.

Rose has left her husband after learning that she is pregnant. Rose has never felt content in her marriage, always had a pain in her chest that was only relieved when she was behind the wheel of her car. Rose drives across country to Tennessee, intent on getting as far from her life in California as she can. When she arrives at St. Elizabeth's, Rose thinks about going on, about having her baby somewhere else. However, Rose knows that she has few choices now that she has left her past behind her. Rose quickly settles in at St. Elizabeth's, making friends with those girls due before and after her.

One of the girls at the home who is due a few weeks before Rose decides she wants to have her labor at the old hotel in order to have the hour's drive to the nearest hospital to hold her babies. Rose goes along with this plan, watching as her friend labors all day long. Late in the night, near dawn, the babies are ready. Rose gets Sister Evangeline who successfully delivers twin boys. As Rose watches them go away in the ambulance, she begins to regret the impulse that led her to choose this avenue for herself. Rose wants to keep her baby. Son, the groundskeeper at St. Elizabeth's, offers to marry her so that she can keep the baby. Rose jumps at the idea and forces him to marry her immediately.

Angie has her baby a few days before Rose and it dies, just as Sister Evangeline said it would. A few days later, Rose gives birth to a girl whom she names Cecilia, inspired by a tattoo on Son's arm. Son does not like this because Cecilia was a girl he once loved who drowned when they were both seventeen. When Rose comes home from the hospital, she goes right back to working in the kitchen, leaving the baby with June Clatterbuck, the owner of the land on which St. Elizabeth's sits.

Several years pass. Sissy, Rose and Son's daughter, grows up with the unwed mothers, learning early that they all leave eventually. When Sissy is ten, June Clatterbuck dies and leaves everything to Son. Son quickly moves his family into the farmhouse, but on the first night, Rose feels she cannot stay. Rose moves back into the groundskeeper's house, separate from her family. Five years later she is still apart from her family, refusing to connect with her husband or her daughter in any meaningful way.

When Rose surprisingly begins giving Sissy driving lessons, she learns that her mother is more willing to talk about the past in the car. Sissy asks all kinds of questions about her grandparents and her mother's love of driving. Before she can learn a lot, however, Rose receives a letter that frightens her. The following morning Rose is gone. Sissy and Son both know she will never come back, but Sissy finds herself hoping. Thomas Clinton arrives at St. Elizabeth's a week later. It was his letter, announcing his visit, that sent Rose running again. Son is terrified Thomas will guess his relationship to Sissy, but Sissy never even suspects. Thomas shows her some pictures of her mother, leaving her with one, and goes back to California, leaving her to face a future without her mother.

More summaries and resources for teaching or studying The Patron Saint of Liars.

The Patron Saint of Liars from BookRags. (c)2022 BookRags, Inc. All rights reserved.