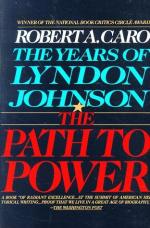 The Path to Power Summary & Study Guide includes comprehensive information and analysis to help you understand the book. This study guide contains the following sections:

This detailed literature summary also contains Topics for Discussion and a Free Quiz on The Path to Power by Robert Caro.

This is a biography of Lyndon B Johnson. Robert Caro is the author of this thorough work about this politician. Lyndon Johnson is presently known as one of the best reputed presidents of the twentieth century in the USA. The book begins with an introduction. In it, the author provides a preliminary explanation of two sets of characteristics described as a recognizable "strain". In this case, they mean that it very clearly indicates a specific lineage. One of those described is the "Bunton strain" and the other is the "Johnson strain". It is quite true that one reason these people enjoyed making these kinds of descriptions is that they handled a lot of livestock. Being familiar with animal husbandry, they felt it was natural to extend this form of observation and control about breeding to people. Another reason is simply that they were looking for another way to communicate to others some very obvious facts. One of these was that they were readily able to recognize that Buntons seemed to recur with such a degree of exactness as to call descendants "copies", even though this isn't exactly possible. Robert Caro explains to readers that in order to understand Lyndon Johnson, one has to understand both Buntons and Johnsons in terms of these "strains" of the lineage.

From this beginning, the book provides an extensive account of the author's rise to power. This includes his political power. There is also a long and very real look at the difference between the author's financial and business experiences and his political life. His business life and his political life were not the same at all. He seemed able to do extremely well in one area but to have chronic troubles in a different area of the same life. This successful politician was viewed as an unsuccessful businessman. He was saved when an older man offered him the ownership of a newspaper. Even so, later on in his political career, Lyndon Johnson declined a third term in political office because he felt he should concentrate more on curing his financial woes. The book does a wonderful job of showing the true Lyndon Baines Johnson. The whole truth has long gone out of fashion American twenty-first century culture; the people are more accustomed to the forked tongue of advertising and making the best presentation possible. That being the case, it really is amazing to read this account that covers the whole truth rather just shifting from two views that are accurate descriptions of part of the truth about this great American politician.

The Path to Power from BookRags. (c)2022 BookRags, Inc. All rights reserved.