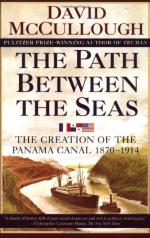 The Path Between the Seas Summary & Study Guide

The Path Between the Seas Summary & Study Guide Description

The Path Between the Seas Summary & Study Guide includes comprehensive information and analysis to help you understand the book. This study guide contains the following sections:

This detailed literature summary also contains Topics for Discussion and a Free Quiz on The Path Between the Seas by David McCullough.

The Path Between the Seas combines a wealth of detail on politics, economics, medicine and engineering in showing how a handful of remarkable Frenchmen and Americans direct masses of Caribbean workers in joining the Atlantic and Pacific oceans at Panama.

The United States shows interest in a navigable connection between the Atlantic and Pacific oceans from the days of Thomas Jefferson, negotiates access to the Isthmus of Panama with Columbia (the Bidlack Treaty, 1846) and builds a small Panama Railroad, just as fast transportation to the West Coast becomes crucial during the Gold Rush. Various routes across Panama, Nicaragua and Mexico are put forth, but no systematic surveying is undertaken before 1870, when the Navy Department commissions several missions, most notably the Darien Expedition, led by Thomas Oliver Selfridge.

Ferdinand de Lesseps steps in, fresh from his victory over the deserts of Egypt, joining the Mediterranean and Red Seas, the most impressive engineering project to date. De Lesseps repeats the process of gathering financial backers, and through explorer Lucien Wyse, buys from Columbia the rights to build a canal across Panama. Supremely confident of the benefit this project will bring humanity, and the honor it will earn for France, de Lesseps in 1879 organizes and closely controls the Congris International d'Ytudes du Canal Interocyanique to legitimize his plans for a sea level, lockless canal. He forms the Compagnie Universelle du Canal Interocyanique and ships in men and material to begin work.

Soaring hopes and misleading propaganda cannot overcome logistical and natural challenges far more massive and expensive than expected. Thousands of ordinary Frenchmen invest in de Lesseps' dream and lose a lot of money when finance charges on loans grow too great. The company goes into receivership with the project less than half-complete. While the Compagnie Nouvelle preserves the work site and makes modest progress in advancing it, it comes out de Lesseps and son Charles have been offering gratuities to journalists and politicians. A great scandal ensues, leaving the U.S. free to challenge the Isthmus.

Theodore Roosevelt brings to the presidency a strong belief in the need for American supremacy on the seas, founded on an isthmian canal. Debate continues over the relative merits of Panama and Nicaragua, while diplomatic efforts go forward to secure access. The Hay-Pauncefote Treaties (1898 and 1901) gain Great Britain's agreement that the U.S may protect the canal "against lawlessness and disorder," and the Hay- Herrbn Treaty (1903) allows the U.S. to buy-out the Compagnie Nouvelle's interests and control the old French Canal Zone. When Columbian nationalists reject the treaty, a lose consortium of Panamanians and Americans, kept together by the omnipresent Philippe Banau-Varilla, organize and execute a bloodless revolt, creating a Republic of Panama. The Hay-Banau-Varilla Treaty (1904) hastily grants the U.S. the rights sought from Columbia.

Americans set to work along the French route and using French equipment, but quickly ship in larger, more modern equipment and organize to overcome the challenges that thwarted de Lesseps. Dr. William C. Gorgas destroys mosquitoes' breeding grounds, and greatly reduces (but never eliminates) malaria, yellow fever, and other diseases. The first Chief Engineer, John F. Wallace, cannot stand up to Washington red tape. The second, John Stevens, ushers in the "Railroad Era," in which the French inability to remove rock and dirt are overcome. The third, Lt. Col. George W. Goethals, brings in the Army Corps of Engineers' experience with massive hydraulic projects to see the canal to a successful close. Mudslides are conquered only when an old French proposal by de Lypinay is adopted, and dredges clear the last remnants of nature's challenge to human ingenuity.

The locked canal opens to traffic ahead of schedule and under budget, but just as the guns of August are being fired in Europe. After the wars, the Panama Canal becomes the useful, peaceful waterway of commerce envisioned for a century and a half.

The Path Between the Seas from BookRags. (c)2022 BookRags, Inc. All rights reserved.