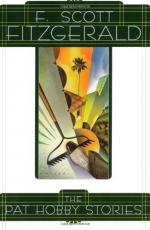 F. Scott Fitzgerald
This Study Guide consists of approximately 29 pages of chapter summaries, quotes, character analysis, themes, and more - everything you need to sharpen your knowledge of The Pat Hobby Stories.

This detailed literature summary also contains Topics for Discussion and a Free Quiz on The Pat Hobby Stories by F. Scott Fitzgerald.

Pat Hobby was once a successful writer in Hollywood when movies were silent. However, once movies had sound, Pat could not write the kind of dialogue or plot that these scripts required. Pat lost his great house, his swimming pool, his wives, and began drinking and gambling away the small amount of money he manages to make fixing other writer's scripts. Everyone at the studio knows that Pat can no longer write the way he once did, but many of the executives are fond of Pat and find his many schemes to get work amusing. As a result, many of these executives will hire Pat for just about any reason they can come up with.

Pat is lazy. Pat does not like to work even when he has a job. Pat will often take someone else's script, change the syntax of a sentence, and call it his own. This way Pat gets his name put on a script and receives credit. However, many times the other writers are aware of what Pat is doing and either stop him or scheme against him to keep him from getting the credit he so desperately wants. At other times, writers give Pat credit for films that turn out badly.

Pat has lived a difficult life. Many of the bad things that happen to Pat are his own fault. Sometimes Pat will blackmail an executive without having all the information or will scheme to create a script without realizing the idea belongs to someone else. Pat is also an alcoholic and a gambler. These things leave Pat in debt, causing him a desperation that makes his scheming to get a job even more important. Pat is not good at scheming, however, and constantly finds himself coming out on the short end of his own schemes.

Jack Bernersappears in A Man in the Way, Teamed with Genius, Pat Hobby and Orson We

Jack Berners is an executive at the studio where Pat works off again, on again. Jack Berners has a soft place in his heart for Pat and often extends a job offer to him when he knows that Pat is desperate. Berners shows up in many of the short stories, but not all. In some of the stories, Berners is merely mentioned as the executive who has contracted the script Pat is currently working on. Berners is the one who hires Pat to work with the playwright in Teamed With Genius, partnering Pat with the playwright who has never written a script before. This playwright, however, manages to write the script on his own without any help from Pat, leaving Pat feeling as though he has been left out of something that could have been important to his career. Berners sets Pat up, catching him stealing a copy of what he believes to be the new script, only to tell Pat he stole an old script that had been rejected, revealing to the reader that Pat does not even know bad writing when he sees it.

Louie is the studio bookie. Louie is the one with whom Pat makes a majority of his bets on the horses. Pat likes to bet on horses, but his luck with the horses is no better than his luck in other avenues of his life. Pat often owes Louie a great deal of money until the day Louie stops taking bets from Pat. Louie is an important part of Pat's life even though he does not have a huge role in the stories. Louie is important because gambling is hugely important to Pat. Pat likes to gamble away his meager earnings because he believes one day he will win a great deal of money and be able to live like he once did. Unfortunately, Pat never makes enough money to change his situation.

Harold Marcusappears in Pat Hobby and Orson Welles, The Homes of the Stars, On the T

Harold Marcus is the head of the studio. When the reader first meets Mr. Marcus, it is while he is sitting in a car gaining access to the studio. Pat begs Mr. Marcus for a ride onto the studio grounds and a pass to get him past security. Mr. Marcus never comes through with the pass, but Pat finds another way onto the studio grounds. Later, Pat finds himself acting as a tour guide to the houses of the stars in Hollywood. Afraid to take his customers to the real Shirley Temple home, Pat takes them to another home that is more accessible. Unfortunately this home happens to belong to Mr. Marcus. Later, Pat learns that a hat he stole belongs to Mr. Marcus. It seems every time Pat's luck turns really bad, Mr. Marcus is right there. The reader has the feeling that eventually Pat will cross Mr. Marcus one too many times and be banned from the studio forever.

Mr. Banizon is a producer with the studio who has a problem. Mr. Banizon has half a script written but does not know the ending and his writer is refusing to finish it for him. Pat sees a chance to make a quick buck and decides to help Mr. Banizon out. However, before Pat can tell Mr. Banizon the end of the script and take advantage of the job Banizon has arranged for him, Pat forgets the story. Banizon was willing to pay Pat more than a third of the salary he was making in his heyday. The salary would have changed Pat's life. Unfortunately, Pat became so frightened of the man who killed the first writer that he forgot the one thing that would have changed his life.

Pat Hobby has been married three times. One of these wives gave birth to a son shortly before leaving Pat. The woman then moved to India and married a rich man there who adopted her son. The son returns to California and goes to the studio to have a tour. Berners instructs Pat to conduct the tour. The son, John Brown Hobby, is not impressed with his father. John wants to meet one of the hottest actresses in Hollywood, but Pat nearly gets them all arrested when he attempts to make this happen. John feels sorry for his father, however, and convinces his uncle to give Pat an allowance. Unfortunately, England goes to war the following day, tying up the uncle's money in British banks, leaving Pat destitute once more.

Harry Gooddorf is an executive at the studio where Pat sometimes works. While Pat is working over Christmas Eve, the secretary sent to him turns out to be Gooddorf's old secretary. The woman is upset because Gooddorf recently replaced her with a younger woman. The woman tells Pat about a letter she once stole a copy of in order to have something to hold over Gooddorf's head if it were ever necessary. Pat decides to use this letter to blackmail Gooddorf into giving him a producer's job. Unfortunately, Pat does not have all the information he needs and finds out that the letter was not an admission of guilt in a murder plot as Pat thought, but the admission of guilt in letting a friend down. Pat is humiliated and left without the producer job he wanted.

Orson Welles is a writer/director in Hollywood. About the time the stories are set, Orson Welles was just beginning to become popular. Pat Hobby hears Orson's name everywhere he goes and is beginning to feel as though Orson is pushing him out. Pat resents Orson Welles and warns everyone that he is just a fad that will pass. One day a friend of Pat's from the costume department wants to dress Pat up to look like Orson Welles. The costume works well, convincing everyone that Pat is Orson. Unfortunately, Mr. Marcus, the head of the studio, has a heart attack and causes Pat, as Orson, to be pushed aside in order to make room in his car for Mr. Marcus.

Gyp McCarthyappears in Pat Hobby Does His Bit

Gyp McCarthy is an actor and a friend of Pat's. Gyp is down on his luck just like Pat and is fighting to get the roles required to help him survive. One day Pat goes to Gyp to ask for a loan. Gyp gives it to him, but as Pat is leaving, he finds himself stuck on the set during the filming of a scene. Pat is filmed in the role Gyp was supposed to do. When the female star leaves the set, Pat is forced to take Gyp's role for the rest of the movie in the interest of continuity. Gyp is left out in the cold, without the pay he needed from the job. Unfortunately for Pat, Gyp's role included a scene in which he was to be run over by a car. Pat is forced to do this scene and finds himself forgotten in a ditch when the male star of the movie breaks his leg.

Dutch Waggonerappears in No Harm Trying

Dutch Waggoner is a director at the studio where Pat sometimes works. Pat has known Dutch for many years and is surprised to learn he has not worked in many months. Pat and Dutch grumble together, complaining about the politics in Hollywood. Pat then gets an idea to write a script and to have Dutch direct it. Pat even finds an actress to star in the movie, a producer to pay for it, and an idea stolen from a callboy. Unfortunately, Pat does not know that the actress does not speak English. Also unfortunate, Pat learns that Dutch is only on contract because he is the cousin of one of the executive's wife. Dutch has a drug problem that causes him to be unreliable during the filming of his movies.

More summaries and resources for teaching or studying The Pat Hobby Stories.