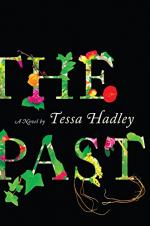 Get The Past from Amazon.com
View the Study Pack
Study Guide
Order our The Past Study Guide

Related Topics
Late in the Day
The Other One

The Past Summary & Study Guide

Tessa Hadley
This Study Guide consists of approximately 85 pages of chapter summaries, quotes, character analysis, themes, and more - everything you need to sharpen your knowledge of The Past.

The Past Summary & Study Guide Description

The Past Summary & Study Guide includes comprehensive information and analysis to help you understand the book. This study guide contains the following sections:

This detailed literature summary also contains Quotes and a Free Quiz on The Past by Tessa Hadley.

The following version of this book was used to create this study guide: Hadley, Tessa. The Past. Harper Perennial, September, 2016. Paperback.

The Past by Tessa Hadley is the story of four Crane children - Alice, Fran, Philip, and Harriet - as they come together for one final vacation at their grandparent's home before making the decision to sell the place or fix it for themselves. Each sibling has their own set of personal dramas but they are determined to make this last holiday together as enjoyable as possible. Along with the adults are the son of one of Alice's former lovers, Fran's children Ivy and Arthur, and Roland's teen daughter Molly. As the adults are focused on their own dilemmas, the children are swept up into their own secrets that shape their lives as well.

Alice and Kasim arrive at Kington, the home of of the Crane's grandparents and their usual vacation spot. Alice cannot get into the house as she does not know where the key is, leaving Kasim to stand around bored and wondering why he came on this trip. The oldest sister, Harriet, is already there but is on a walk down the beach. Fran arrives with her children, Ivy and Arthur, and she shows Alice where the spare key is so they can open up the house. Ivy is instantly taken with Kasim, but he is not impressed with her, as he does not like children. He checks his phone, but Ivy tells him that there is no cell phone reception and that he has to go to the fence gate at the end of the field. He goes there to check his messages, with Ivy tagging along, but he realizes that he does not wish to talk to anyone.

As Fran and Alice start to open up the house, Alice asks about Fran's husband but is told that he will not be coming, as he intentionally scheduled work to conflict with the trip. Fran also tells Alice that she is tired of her husband's inconsiderate ways and she is leaving him. Fran becomes upset when she realizes that due to Kasim's presence, she will have to sleep in the same room as her children. Harriet returns to the house and Arthur follows her around and watches as she unpacks. Later in the evening, Kasim gets drunk after dinner and drills the ladies on economics and politics trying to prove that he is more intelligent and sophisticated than they are.

The next day, Roland Crane arrives with his new wife Pilar and his teenage daughter Molly. As soon as Molly and Kasim see each other, they are attracted, but they do not speak. Kasim, Ivy and Arthur take a walk as they want to show Kasim a waterfall. They are disappointed that the waterfall is not very big, but they come across an old cottage. As Kasim drifts off to sleep in the front yard, Ivy and Arthur go inside. At first they are scared but they gradually work up the courage to look around. They first find a decaying pornographic magazine, then they come across a corpse of an animal that they find to be Mitzi, the dog belonging to the neighbors. During dinner, Fran and Alice try to get to know Pilar, but she is very aloof towards them. Pilar is more intent on talking to Harriet, and Harriet instantly takes a liking to her. The next day, an argument breaks out as Alice reads some of Roland's letters to their mother out loud, embarrassing Roland and infuriates Pilar.

As the vacation wears on, Molly, Kasim, Arthur, and Ivy spend a great deal of time together. They usually walk to the waterfall or around the area. One day, Roland takes Molly and Kasim into the town where Molly and Kasim go to an arcade. Pilar and Harriet go swimming at a nearby beach where Pilar tells Harriet about her family's problems. Alice and Fran argue about love and Alice's failures at having a relationship.

Later, they are visited by the neighbors who owned Mitzi. Ivy is in a terrible mood and is hard to control, while Arthur asks about the dog. The neighbor explains that the dog had ran off months before, but she is still holding on to hope that the dog can be found. Because Ivy is so upset, she takes Alice's lipstick and writes profanities in Harriet's diary. She also tells Arthur later in the evening that a supernatural force she calls the Dead Women have the power to do negative things and that she is the only one who can understand them. She tells Arthur that he has to cut up the curtains, which he blindly does. Kasim gives Alice the china boot he won at the arcade as a joke, but Alice is able to laugh it off.

The novel moves backwards several years to 1968, as the Crane children's mother, Jill Fellowes, arrives at Kington unexpectedly. Jill's parents, Grantham and Sophy, are excited to see Jill but do not openly suspect why she has returned. Jill looks for work in the nearby village but is disappointed when she does not find anyone willing to hire her. She also visits the office of Mikey Waller, a former classmate and the current real estate agent, to inquire about renting a home.

As Jill and the children settle into the quiet country life, Tom Crane, Jill's husband calls. He begs for Jill to come home, but she hangs up on him shortly after he apologizes for cheating on her. A few nights later, Tom shows up to continue his attempts at making up with Jill. Jill does not let him into her parents' home, instead she takes him to the nearby abandoned cottage. When Tom tries to seduce Jill, she angrily rebuffs him and tells him to go back to London and abandons him in the cottage.

Sophy and Grantham privately discuss the reason for Jill's visit. Sophy indicates that Jill wants to rent a home of her own for herself and the children, but Sophy tells Grantham that she suggested that Jill move back to London with Tom. Grantham insists that Jill would be better off staying at Kington and raising the children with them. Grantham also says that he has never liked Tom and Jill's staying with them would mean that she could resume her literature studies with him. Sophy is pleased with Grantham's insistence that Jill stay as it is secretly what she had been hoping for.

The next day, Jill goes with Mikey to look at some houses but she is disappointed in what she sees. Instead of looking at more houses, Jill takes Mikey to the cottage for a brief sexual encounter, during which Mikey claims that he loves her. Jill ignores what he says and Mikey immediately takes Jill home. After she puts the children to bed that night, Jill talks with Sophy and Grantham about staying in the community. Grantham insists that Jill would have a much better life staying with him and Sophy. He also tells Jill that Tom is no good for her and that Grantham has never liked him. This admission causes Jill to call Tom in the middle of the night and tell him that he needs to come as soon as possible to take her and the children home to London.

Pilar and Harriet continue to get to know each other better as Pilar confides in Harriet that she is adopted and her potential biological parents have shown up. She does not want to take the DNA test but may be forced to as her brother considers it. The vacation continues, but rain sets in, causing everyone to become bored. Roland says that if the house is to be kept it will need electricity and internet access. At a dinner in town, everyone agrees that it is time to sell the home as they cannot afford the improvements that it needs. Molly, Kasim, Ivy and Arthur spend a good deal of time playing Scrabble and Monopoly. On one particular afternoon, Kasim becomes angry at Molly's superior scrabble skills and the way she objects to Kasim's nonchalant attitude towards an article in a newspaper about violence.

Pilar and Harriet go to the hotel pool again, but at the end of their time there, Harriet makes a sexual advance towards Pilar, infuriating her. Pilar gets back to the house and demands that she and Roland leave immediately and Harriet leaves to walk in the woods. Molly decides to stay with the others as Kasim has said he has a surprise for her. After a few hours, Harriet does not come back to the house. Alice goes out and fins her in the creek naked and saying she wants to die. Alice knows that Harriet had feelings for Pilar, as she had recently read Harriet's diary. Alice helps Harriet back to the house and into bed, where Harriet spends the majority of the rest of vacation.

The next morning, Fran notices that Molly and Kasim are not there and have not been in the house all night. Becoming frantic, Fran notices that Ivy and Arthur know more than they are letting on, shattering her illusions that her children are innocent babies. Fran decides to cut Arthur's hair to prove that he is now a boy who is growing up. Later, she and one of the neighbors go out looking for Kasim and Molly. They come to the old cottage and find that it has fall apart, with most of the house at the bottom of the cliff. On the way back to the house, Fran and the neighbor meet up with Molly and Kasim who say that they had spent the night in the cottage but left early in the morning and had fallen asleep by the waterfall.

Since the family has decided to sell the house, they call in a realtor who comes to visit. He brings along his father, who decides to stay out of the house and walks around the yard. He notices Fran hanging laundry and realizes that she is the daughter of Jill Fellowes, the woman he loved once but was forced to live without.

More summaries and resources for teaching or studying The Past.

The Past from BookRags. (c)2022 BookRags, Inc. All rights reserved.