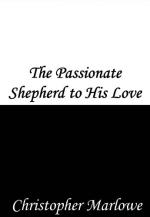 Christopher Marlowe
This Study Guide consists of approximately 26 pages of chapter summaries, quotes, character analysis, themes, and more - everything you need to sharpen your knowledge of The Passionate Shepherd to His Love.

This book contains essays by sixteen different scholars who comment on Marlowe's life and his texts, as well as his influence on later writers.

This book details the social and economic history of rural England during the period from 1500 to 1750. There is information about wages and profits associated with estate management, as well as details about the lives and status of laborers.

Cole, Douglas, Christopher Marlowe and the Renaissance of Tragedy, Praeger, 1995.

Cole examines the major literary traditions of Marlowe's era and how he transformed them into themes fitting his own purpose.

This biography of Marlowe examines Marlowe's life by placing him in a cultural context. Rather than just focus on...

More summaries and resources for teaching or studying The Passionate Shepherd to His Love.

The Passionate Shepherd to His Love from Gale. ©2005-2006 Thomson Gale, a part of the Thomson Corporation. All rights reserved.