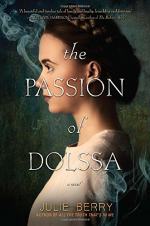 The Passion of Dolssa Summary & Study Guide includes comprehensive information and analysis to help you understand the book. This study guide contains the following sections:

This detailed literature summary also contains Quotes and a Free Quiz on The Passion of Dolssa by Julie Berry.

Friar Arnaut D'avinhonet is the clergyman who compiles all the information about Dolssa, and he says from the beginning that the inquisitors may have overstepped their authority and may have executed a woman who truly had a personal relationship with Jesus. He gathers all the relevant details, including records of interrogations and Botille Flasucra's version of the events. The friar knows that he needs to burn the information after he puts it all together, but he hesitates, saying that he wants to pray about it before he destroys the papers. As the novel comes to an end, the modern-day author who reworded the text to make it more readable for modern-day readers writes about what happened to the various characters. Friar D'avinhonet was killed in a freak accident shortly after compiling the information, which is why it has survived.

Dolssa is a young woman who claims to have a personal relationship with Jesus at a time when the clergy of the Catholic church were burning hundreds of “heretics” at the stake for similar claims. Dolssa's mother warns her to be careful, and Dolssa only preaches from the security of her home. However, officials overhear her sermons and sentence both Dolssa and her mother to death. Dolssa's mother dies in the flames but Dolssa's, bonds are released and she escapes. She believes that Jesus released her but later discovers that a kinsman, Senhor Hugo da Miramont, had cut her free. Dolssa runs away and evades authorities for awhile, but she is soon weak from hunger and near death.

Botille Flasucra and her two sisters operate a tavern in Bajas. The three have traveled a lot in recent years and have worked hard to make Bajas their home. An older woman in the community asks Botille to travel to another village and bring back her two nephews to take over her vineyard. Botille takes on the task willingly. On the way home, she finds Dolssa, too weak to travel any farther on her own. With some help, Botille takes Dolssa home with her and hides her in the tavern where she slowly begins to heal. Right away, the sisters notice “miracles” happening in their home, including a single jug of ale that serves more customers than it should. Soon, Dolssa heals an infant who cannot nurse and later brings a father and son back from the brink of death. The people of Bajas begin to seek her out, and she takes time to pray for anyone who needs her help. While the people of the village are quickly devoted to Dolssa, news of this woman healing people spreads and Friar Lucien arrives. Though most of the villagers are determined to protect Dolssa, the friar is methodical and ruthless. He begins sentencing people to all sorts of punishments as he works his way toward Dolssa. By the time other church officials arrive to help with the inquisition, Friar Lucien is certain he will find Dolssa nearby.

Senhor Hugo tries to save her, but Dolssa knows that Botille and her sisters, along with some other members of the community, will be burned at the stake for helping her. She turns herself over to the church officials and dies there. Botille runs away with her two sisters and Symo, one of Pieret's nephews. They become separated and Botille has to make a life on her own for months, until Symo finds her. By then, Botille has discovered that one of her sisters is living in a convent, but the other is never seen again. Botille's younger sister reveals Botille's presence during confession, and another friar arrives to take her into custody. She swears that Symo is dead, as is their son, Bertran. However, Botille later manages to get a little boy to take word to Bertran that it is time for him to run away and hide.

The Passion of Dolssa from BookRags. (c)2022 BookRags, Inc. All rights reserved.