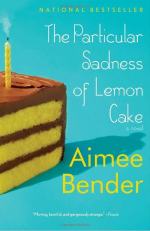 Related Topics
The Color Master
The Girl in the Flammable Skirt: Stories

Aimee Bender
This Study Guide consists of approximately 45 pages of chapter summaries, quotes, character analysis, themes, and more - everything you need to sharpen your knowledge of The Particular Sadness of Lemon Cake.

This detailed literature summary also contains Quotes and a Free Quiz on The Particular Sadness of Lemon Cake by Aimee Bender .

The Particular Sadness of Lemon Cake is about Rose, a young girl who discovers on her ninth birthday that she has a special ability for tasting the emotions of the person who has made the food. The first time she notices her unique tasting talent, she senses the tremendous sadness of her mother when she bakes Rose a chocolate lemon cake. Rose cannot bear to eat the cake. This puzzles her mother, Lane. Rose thinks a lot about the emotions in the food and begins to notice them in everything she eats, eventually pinpointing the origin of the ingredients. She turns to George, the friend of her distant and seemingly anti-social brother Joseph, to try to understand what is happening to her. Like Joseph, George has a keen interest in science and agrees to do some research experiments on her ability. While Rose’s newfound ability fascinates George, he is unaware of her growing crush on him.

Joseph is socially withdrawn. He keeps to himself in his room, aided by the addition of a door, crafted by her mother, for his bedroom. He barely interacts with his family at the dinner table. When he does, it is often reluctantly. He does, however, have a stronger relationship with his mother. She views him as special and looks to him for guidance. The father, who is withdrawn in his own way, does not really connect with Joseph. Joseph and Rose seem to understand one another and foster a relationship built on small talk and similar interests in television programs.

Through her mother’s cooking, Rose learns that Lane has been having an affair. She keeps the secret to herself. While she does not initially confront her mother, the knowledge of the affair weighs heavily on her. Her relationships at school also suffer. Rose is distant from her classmates, relying on her friendship with Eliza. When she meets a new transfer student, Sherrie, she befriends her and tells her about her special talent. Rose’s ability to sense the emotions fascinates the friend. Though a novelty at first, it escalates into Sherrie taking advantage of Rose to understand how she really feels about something. Rose attempts to see Sherrie outside of the context of food, but she is no longer interested. Rose walks away from the friendship. The situation prompts her to return to keeping her special skill hidden.

Rose notices that Joseph’s behavior is becoming more strange. When she goes out, Lane leaves Joseph in charge to babysit Rose. Rose does not think she needs a babysitter, and Lane ends up paying her daughter to go along with it. One night, Rose realizes that Joseph has disappeared. Concerned, she looks for him and runs into him in the hallway. He does not indicate where he was, but over time, Rose notes that he continues to disappear and for longer stretches of time.

After universities reject Joseph's applications, he agrees to go to a city college if he can get an apartment on his own. His parents arrange for the apartment, and Joseph disappears without a trace. Rose tries to understand where Joseph has gone and how it may or may not be a connection to her special skill as well.

More summaries and resources for teaching or studying The Particular Sadness of Lemon Cake.