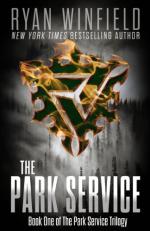 Holocene II is an underground society that has flourished miles under the earth in the aftermath of a nuclear war. The society began from the ideas of founder Dr. Robert Radcliffe. The people in Holocene II manufacture their own food, provide their own textiles and other resources. Holocene II society is strictly governed by certain rules rather than a governing body. The people of Holocene II are given jobs and living arrangements based on how well they perform on a test administered to all people at the age of fifteen. The people then work until the age of thirty-five and then are sent to Eden, a virtual place where they can have anything they want and be with the people they love.

Aubrey was always taught that the earth’s surface was under ice as it was experiencing a second ice age in the fallout...