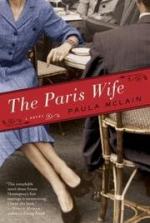 Paula McLain
This Study Guide consists of approximately 48 pages of chapter summaries, quotes, character analysis, themes, and more - everything you need to sharpen your knowledge of The Paris Wife.

The Paris Wife: A Novel Summary & Study Guide includes comprehensive information and analysis to help you understand the book. This study guide contains the following sections:

This detailed literature summary also contains Topics for Discussion and a Free Quiz on The Paris Wife: A Novel by Paula McLain.

"The Paris Wife," by Paula McLain, is the story of Hadley Richardson and Ernest Hemingway during the years between 1920 and 1927. The story begins in Chicago where Hadley had come to visit her friends Kate and Kelsey Smith (sister and brother) who had a large apartment and rented out rooms to friends. One of the friends staying there was budding writer Ernest Hemingway. Hadley was from St. Louis and made the trip to Chicago to get away from her life there. She had just lost her mother to a long-term illness and she was "stuck" living in the family home with her mean-spirited sister and her husband who had taken over the house.

Hadley had a great time the first night that she was there. The young, handsome Ernest Hemingway charmed her and danced with her to all hours. She was taken with Ernest even though at 21, he was nearly eight years younger than she. Kate warned Hadley that the young man was quite a womanizer and to stay away from him. But she took no heed and got to know Ernest quite well in the short time she was there. She learned that he was writing copy for a tire company but wrote poetry and fiction on the side. He wanted to do some important writing some day. After staying two weeks, Hadley was heading home. Ernest took her to the train station and kissed her goodbye. He said he would write.

Back home, things were just as dreary as when Hadley left. She was stunned when her sister handed her a letter from Chicago - the return address told her it was from Hemingway. She was elated and soon planned a trip back to Chicago to spend time with her friends - but she hoped that Ernest would take up most of her time. After returning to St. Louis again, the letters from Ernest dropped off. She feared he had lost interest. But those fears were all behind her when she received a letter from Ernest asking her to marry him and go to Rome with him. Hadley readily agreed and didn't look back.

After they married, they rented a small apartment and saved their money so they could go to Rome. But a literary contact told Ernest that most American artists were in Paris—it was that city where all the artistic magic was happening. That's all Ernest had to hear and it was off to Paris. Ernest was given letters of introduction to some famous American literary giants living in Paris. Gertrude Stein took the young writer under her wing and became his mentor. Ezra Pound was impressed with his poetic abilities and submitted some of Ernest's work to his contacts.

Eventually the couple made their way around Europe. In Spain, Ernest became enraptured with bullfighting and rounded up his friends to attend the bull run in Paplona and the bullfights in Madrid. Hemingway's first blockbuster, "The Sun Also Rises," was based on characters in his own life and took place in Spain and in the world of bullfighting.

There were splinters in their marriage most of which Hadley tried to explain away or ignore. She saw his interest in other women and his self-centered attitude about his career, not to mention his over-indulgence in alcohol. When all of the manuscripts he had written over the years were stolen from her on a train she was taking to join him, it turned out to be a turning point in their relationship. He didn't trust Hadley after that and, in fact, lost his ability to trust women in general. Driving the stake in the heart of the marriage even deeper was when Hadley became pregnant. He was not ready for fatherhood and felt she tricked him into it.

Pauline Pfeifer, one of Hadley's best friends, set her heart on stealing Ernest away and eventually she did just that. Hadley tried to stay on and fight for her man but she only lost stature in his eyes and made herself miserable. Once she finally decided she did not want to continue living with a man who was in love with someone else, she realized that divorce was the only answer.

In the end, Hadley did not regret her time with Ernest. He was a fascinating man with whom she had a cherished son. Life was never the same after she met Ernest Hemingway. Although he broke her heart, she realized years later that she became a better and stronger person because of him. Ernest was bigger than life. Everyone associated with Ernest Hemingway was impacted by him the for the rest of their days.

More summaries and resources for teaching or studying The Paris Wife: A Novel.

The Paris Wife: A Novel from BookRags. (c)2021 BookRags, Inc. All rights reserved.