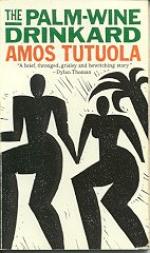 Amos Tutuola
This Study Guide consists of approximately 25 pages of chapter summaries, quotes, character analysis, themes, and more - everything you need to sharpen your knowledge of The Palm-wine Drinkard and His Dead Palm-wine Tapster in the Dead's Town.

The Palm-wine Drinkard and His Dead Palm-wine Tapster in the Dead's Town Summary & Study Guide includes comprehensive information and analysis to help you understand the book. This study guide contains the following sections:

This detailed literature summary also contains Topics for Discussion and a Free Quiz on The Palm-wine Drinkard and His Dead Palm-wine Tapster in the Dead's Town by Amos Tutuola.

The young palm-wine drinkard drinks truly staggering amounts of palm-wine until the day his tapster dies. The drinkard goes off on a quest to find the tapster, journeying through a dangerous jungle and fighting many scary monsters on his way to Deads' Town. Although the tapster does not return with him, the drinkard does return with a beautiful wife and a magic egg.

When the palm-wine drinkard hears that the dead do not go straight to heaven but live in other towns, he decides to go find his dead tapster. The drinkard is out of wine and wants more. Early in his journey, he is asked to rescue a beautiful young girl who is being held captive by a family of Skulls. The drinkard uses his tricks to save the girl and marries her. She joins him in his travels. They encounter many strange towns with strange people living in them. Some of the people are "deads" or spirits, and some are very cruel to the drinkard and his wife. One day, the wife's thumb miraculously gives birth to a boy. The drinkard and his wife murder their child when he turns out to be a monster that destroys everything around him. After they kill their baby, it is born again and chases them around. They face many monsters in the jungle and barely escape.

On the way, the couple sells their deaths, so they no longer need to worry about dying. When they finally get to Deads' Town, the couple can not go in because they are still alive. The tapster is happy to see them and gives them a lot of wine, which the drinkard drinks immediately. The tapster also gives them a magic egg which can grant all kinds of wishes if placed in water. The couple moves on and settles for a while in a town where the drinkard works as a judge. When the cases start to push the limits of his wisdom, he and his wife go back to his hometown.

In the drinkard's hometown, everyone is starving from a terrible famine. It seems Heaven and Land have had an argument, and as a result Heaven is denying rain from Land. The drinkard places the magic egg in water, and it produces so much food that people come from all around to get food. In their haste to take food, the people break the egg, and it will not make any more food. Finally, they send a sacrifice to Heaven, and it begins to rain, so the famine is ended.

More summaries and resources for teaching or studying The Palm-wine Drinkard and His Dead Palm-wine Tapster in the Dead's Town.

The Palm-wine Drinkard and His Dead Palm-wine Tapster in the Dead's Town from BookRags. (c)2022 BookRags, Inc. All rights reserved.