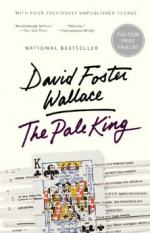 David Foster Wallace
This Study Guide consists of approximately 38 pages of chapter summaries, quotes, character analysis, themes, and more - everything you need to sharpen your knowledge of The Pale King.

This detailed literature summary also contains Topics for Discussion and a Free Quiz on The Pale King by David Foster Wallace.

The Pale King is an unfinished novel and as such presents only a tentative plot. Much of the novel's material is tangential or unrelated to the main narrative plot action. For this reason, the novel is best read as a tone or texture novel and not a novel overly concerned with plot. The central character of the novel is one David Foster Wallace, who narrates major sections of the novel and claims to be the author of the book. The narrator also makes numerous claims that the novel is in fact non-fiction. Presumably, the autobiographical memoir is presented as fiction at the demand of the publisher who feared legal ramifications for publishing the memoir as written. One of the central conflicts in the novel surrounds the protagonist David Foster Wallace presenting for his first day of work as a new hire at an IRS center where he is mistaken for another person also named David Foster Wallace who is also appearing for his first day of work as an experienced senior IRS employee being transferred to the same IRS center. This case of mistaken identity finds both men placed in the wrong intake and assigned to the wrong jobs. When the situation finally is rectified, the hapless protagonist David Foster Wallace is almost fired for possibly manipulating the system to his own advantage.

The backdrop of the IRS features the agency undergoing a major internal reorganization that involves a serious shift in emphasis. The old guard of the staff in the novel view the IRS as a sort of law enforcement agency. In this ideology, the IRS code is held as the law and individual tax returns are measured against the code. Any infraction is to be corrected, regardless of severity. The new idea focuses on the IRS' mission to generate revenue. In this ideology tax returns are examined to determine whether or not they have the types of infractions that likely will generate additional revenue. Mistakes or deliberate errors that likely result in only small monetary differences are to be ignored; mistakes or deliberate errors that likely result in large revenues are pursued aggressively. Much of the novel focuses on the friction between these competing ideologies. These changes also go hand-in-glove with the gradual adaptation of technology for automated processing and automated review of taxpayer filings. Most employees feel that computers have a very limited role in the review process. A few employees, led by a rising star in the IRS, believe that most employees can be replaced by computerized automation. This division of theory also leads to friction within the novel though this aspect is not as fully developed as the general shift in attitude.

More summaries and resources for teaching or studying The Pale King.