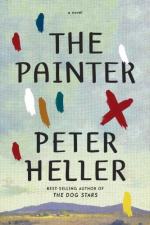 The Painter Summary & Study Guide includes comprehensive information and analysis to help you understand the book. This study guide contains the following sections:

This detailed literature summary also contains Quotes and a Free Quiz on The Painter by Peter Heller.

The Painter is Peter Heller's second novel, published in 2014. The novel follows the internal life of fictional successful Southwestern painter Jim Stegner over a few months as he attempts to deal with his grief over his teenaged daughter's death and his failed marriages. On his way to his favorite fishing spot, Jim encounters two men abusing a horse, and assaults one of them, Dellwood Siminoe. Jim learns later that Dell is known for cruel and abusive behavior, and when he encounters Dell while night fishing, he kills him. Though the police are unable to prove Jim's crime, he is the primary person of interest, and Dellwood's family members pursue him outside the law intending to avenge his death. Jim's internal struggles with his guilt are countered by a new romantic relationship with Sofia, his artist's model. Meanwhile, his paintings reflect his ongoing internal turmoil, and he finds out more about the humanity of his victim. When Dell's brother Grant catches up with Jim at an isolated campsite, it results in Grant's death. All the publicity involved in the crimes leads to an increase in Jim's popularity as an artist. While dealing with various pursuers, Jim must find his way to forgiveness and redemption.

The Painter from BookRags. (c)2022 BookRags, Inc. All rights reserved.