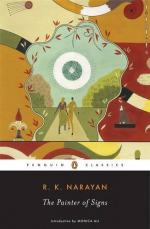 The Painter of Signs Summary & Study Guide includes comprehensive information and analysis to help you understand the book. This study guide contains the following sections:

This detailed literature summary also contains Quotes and a Free Quiz on The Painter of Signs by R.K. Narayan.

The following version of this book was used to create this study guide: Narayan, R.K. The Painter of Signs. Penguin Classics, 2006.

The Painter of Signs tells the story of Raman, a sign-painter, and Daisy, who works at a Family Planning Clinic, who form a romantic relationship after Daisy hires Raman to paint a sign for the clinic. In Part One, Raman has a disagreement with a lawyer about a sign he is painting for him and the lawyer does not pay him in full. Raman lives with his aging Aunt who takes care of all of the cooking and cleaning in their home. Raman visits a bangle-seller who also refuses to pay Raman for a sign he has completed, complaining about the coloring of some of the letters. Raman listens to an eccentric preacher, the Town Hall Professor, in a public square. The Professor criticizes one of Raman’s signs, which uses the words “Strictly Cash” and exchanges it with Raman for one of his own messages, which reads “This will pass.”

Raman begins work on a sign for the local Family Planning Clinic but is preoccupied with thoughts about Daisy, the woman who commissioned him to do the work. He invents a reason to visit Daisy at her home to ask her some questions about the sign, but Daisy tells him that he can make any decisions himself. Raman buys a pair of sunglasses so that he does not have to look directly at Daisy the next time he sees her, but she takes the glasses away from him when he comes inside. Raman becomes constantly preoccupied with thoughts about Daisy. He delivers the sign to the Family Planning Clinic and is grateful that he will no longer have to see Daisy.

In Part Two, Daisy visits Raman at home and asks him to accompany her on a trip around local villages to scout locations to paint signs spreading information about family planning. Raman agrees. During the trip, Raman notices that he is becoming very considerate of Daisy’s feelings and wonders if she will one day be his wife. Raman and Daisy are driven to the nearest bus station by a man with a cart pulled by a bull. When the bull is injured, the driver, believing Daisy and Raman to be a married couple, leaves them alone together overnight while he searches for help. Raman cannot sleep because of his desire for Daisy and eventually climbs into the cart where she is sleeping, telling himself that he will hold her down if she resists him, but Daisy is not there. The next day, Daisy is very angry with Raman for the way he behaved the previous night and tells him that she intends to report him to the police when they get back to Malgudi.

In Part Three, Raman worries obsessively about whether he will be arrested. He speaks to friends and family members to try to find out if there is any gossip about him and Daisy, but no one seems to know anything. He goes to the police station and the inspector tells Raman he has been looking for him, but the inspector leaves without explaining himself, and Raman is convinced that no report has been made against him when he leaves the police station without anyone trying to stop him.

Weeks later, Daisy visits Raman at home and tells him about her life: she grew up in overcrowded conditions and ran away from home after disappointing her family when she did not behave in the way expected of her while her family were trying to arrange for her marriage. Daisy abruptly cuts short her conversation with Raman when she realizes what time it is. Raman comes up with another excuse to visit Daisy at home and they begin a romantic relationship.

In Part Four, Raman tells his Aunt that he intends to marry Daisy and his Aunt does not support the marriage because of Daisy’s religion and cultural background. Raman’s Aunt announces that she is going on a pilgrimage to the city of Benares and intends to stay there until she dies. Raman pleads with her to stay, but she is adamant. Raman suddenly realizes how much work his Aunt has put into taking care of him over the years.

Raman prepares his house for Daisy to move in and they spend the night together in his bedroom. However, on the day Daisy is due to move to Raman’s house, she is called away to work in a different town. Daisy ends her relationship with Raman because she believes her work is more important. She gets into a taxi and Raman watches as she leaves Malgudi for good.

The Painter of Signs from BookRags. (c)2022 BookRags, Inc. All rights reserved.