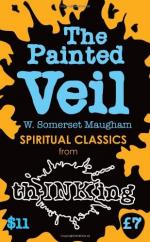 W. Somerset Maugham
This Study Guide consists of approximately 34 pages of chapter summaries, quotes, character analysis, themes, and more - everything you need to sharpen your knowledge of The Painted Veil.

This detailed literature summary also contains Topics for Discussion and a Free Quiz on The Painted Veil by W. Somerset Maugham.

After basically ruining her marriage with an affair, Kitty accompanies her husband, Walter, to Mei-tan-fu, a Chinese province afflicted with a cholera epidemic. There, amid death and misery, Kitty sees in a convent of French nuns great examples of self-sacrifice and the kind of happiness she had always wanted.

Kitty, an Englishwoman, had been pressured from a young age to marry well by her mother, who tried to overcome her own sense of failure through her daughters. Kitty shared these social ambitions but could never find the right mate. Out of desperation, she married Walter Fane, a scientist, and returned with him to Hong Kong where he conducted his work. Kitty was never happy in her marriage, and thus she finds herself in an adulterous affair with Charlie Townsend, a man of some influence and status in Hong Kong. When Walter finds out, he asks Kitty to either come with him to Mei-tan-fu or he will sue her for adultery. Kitty, blinded by love, thinks Charlie, who is also married, will leave his wife for her and they will live happily together. Charlie, however, has no such intention. It is too impractical for a man with his career he tells her. Heart-broken and without any other option, she travels with Walter to Mei-tan-fu, suspicious that his intention is for her to catch cholera and die.

When they arrive there, the tension between Kitty and Walter persists. Waddington, a local customs official, becomes a kind of counselor to Kitty, helping her out with keen insight and observations. He introduces her to the French nuns who are working with the poor in the area and taking care of the many orphans. So impressed by their spirit of self-sacrifice, Kitty begins working for them and helping out around the convent. One day while at work, she discovers she is pregnant, though she does not know who the father is. Despite her many attempts to rectify the situation with her husband, his cold demeanor does not lighten, and Kitty is awakens one night to the news that he has come down with cholera. Kitty and Waddington barely make it to him before he dies, and he is hardly conscious at all.

Kitty remains about a week after his death and burial before heading back to Hong Kong briefly before sailing to England to return to her family. Her hope of not seeing Charlie Townsend is dashed when she is met by his wife, Dorothy, who insists that she stay with them while she is in Hong Kong. Still bitter and angry towards Charlie after the way he treated her, she tries to keep her distance, but winds up faltering and yielding to his advances. Kitty becomes disgusted with herself; she thought she was a changed woman and is ashamed at how easily she fell back into her old ways. She leaves two days later.

Kitty's mother dies shortly before she returns. Her father, however, is apparently not very distraught by it. Kitty realizes that the family has largely taken the father for granted, as an unloved source of income. He has received and accepted a commission as a judge in the Bahamas and looks at it as an escape. Reflecting on the spirit of sacrifice in the nuns, which made them so happy, Kitty asks her father if she can come with him, resolving to do everything in her power to make him feel loved and happy.

More summaries and resources for teaching or studying The Painted Veil.