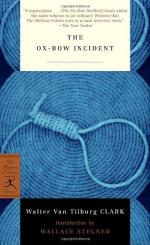 Walter Van Tilburg Clark
This Study Guide consists of approximately 24 pages of chapter summaries, quotes, character analysis, themes, and more - everything you need to sharpen your knowledge of The Ox-Bow Incident.

This detailed literature summary also contains Topics for Discussion and a Free Quiz on The Ox-Bow Incident by Walter Van Tilburg Clark.

The Ox-Bow Incident is a novel by famed western writer Walter Van Tilburg Clark. In this novel, two cowboys return to town after a long winter caring for a herd of cows. Within hours the men become a part of a mob outraged both over the theft of some cattle and the murder of a popular cowhand. Arguments are made for and against tracking the criminals and hanging them before the law can interfere. Finally the mob goes after the killers, cornering them in a meadow known as Ox-Bow. The mob hangs the men despite some doubt as to their guilt, only to learn they should have waited. The Ox-Bow Incident is a study in mob mentality that will stick with its readers for a long time after the final sentence is read.

Gil Carter and Art Croft come into town after wintering with a herd of cattle. The boys stop at the local saloon to have a few drinks. Gil gets into a poker game and nearly fights with a local man named Farnley over his stroke of good luck. Art tries to get Gil to give the money he won back to soothe ruffled feathers. Art is concerned because there has been talk of a cattle rustler and Art worries that because he and Gil are not as well known in town as some of the others suspicion might fall on them. Gil agrees to give the money back, but before he can bad news comes to the saloon.

A cowhand on a local ranch called Kincaid is said to have been shot in the head that afternoon. Again Art worries that suspicion might fall on he and Gil, so he tries to stay in the background. However, when a group of angry men begin talking about finding the killers and hanging them, Art finds himself forced to pick sides. While Gil agrees to join a posse that plans to track down the killers, Art agrees to go find the sheriff and local judge. Art discovers the sheriff is out at the ranch where the murder took place, but the judge is at home. Art tells the judge about the murder and the growing mob, hoping the judge can talk the men into waiting for a proper posse to be formed to bring the men to justice. However, the judge is a weak man and he allows the temporary sheriff take control of the situation.

The situation grows while Art is gone. Fueled by the support of Tetley, a local rancher and ex-Confederate officer, the mob once again becomes impatient to find the killers. Several people make speeches, trying to talk the mob into trusting the legal system, but the men are afraid that the killers will get away with their crime if they are left to the legal system. News that three men with cattle from the Drew ranch were seen going in the opposite direction as the men had assumed the killers had gone inspires the mob into action, hoping they can find and hang the killers before the sheriff even learns of their actions.

The mob moves up a steep trail into the hills as darkness descends. Art speaks with Tetley's son, a feminine boy who is always overshadowed by his masculine father, and becomes convinced the young man is suicidal. Art, however, forgets about this encounter as the mob meets a stagecoach headed in the opposite direction. The men try to stop the stagecoach to ask if they have seen anyone suspicious, but the driver and security guard believe they are thieves and begin to shoot. Art is shot in the shoulder. The stagecoach driver realizes his mistake and stops, allowing his passengers to disembark on the dark road. Among the passengers is Gil's girlfriend, newly married to a man from San Francisco.

The mob learns that there are three men on the road ahead of them in a meadow known as Ox-Bow. The mob approaches carefully, sneaking up on the killers. Most of the men are shocked to find the three killers sleeping when they approach. The men are awoken and interviewed. Each man denies the crimes, claiming innocent explanations for why they have cattle from the Drew ranch and why one of them has the dead man's gun. The mob decides to hang the men anyway, despite their claims to innocence, but they delay the event until dawn. At dawn, the three men are hung and the mob begins to make their way back down the hill. On the trail they run into Drew and the sheriff who tell them that the three men they have just executed are not only innocent, but that the man thought murdered, Kincaid, is alive and well.

The mob returns to town minus a handful who have joined the legitimate posse hunting the cattle rustlers. The local store owner, the most verbal against the hangings, comes to speak to Art. The man feels guilty because Tetley's son has committed suicide. The man, Davis, feels he should have worked harder to stop the hangings. As they speak, Gil and Canby come into the room and announce that Tetley Sr. has also killed himself out of a sense of remorse for the hangings.

More summaries and resources for teaching or studying The Ox-Bow Incident.