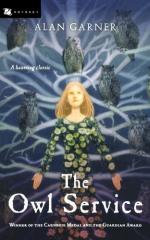 Alan Garner
This Study Guide consists of approximately 41 pages of chapter summaries, quotes, character analysis, themes, and more - everything you need to sharpen your knowledge of The Owl Service.

This detailed literature summary also contains Topics for Discussion on The Owl Service by Alan Garner.

The Owl Service, by Alan Garner is a young adult's/children's fantasy story set in seventies Britain, in the country of Wales and features the tumultuous friendship of three children Alison, Roger and Gwyn as they are forced to spend a summer in a mysterious isolated valley. During their stay we discover that ancient secrets are buried not only in the Valley but also in the past's of each of the younger character's as they struggle to come to terms with who them are, and where they are going.

Alison and Roger are step-siblings, their parent's Margaret and Clive having remarried after Alison's father died and Roger's mother left Clive and was subsequently divorced. Now that they are a a new family unit, Clive and Margaret decide to holiday in Wales in an attempt to bond the two sides of their family together: an attempt that goes disastrously wrong as they encounter Gwyn, a Welsh lad who is the son of the house keeper Nancy and is forced to come to help his mum look after the house.

What follows for the three is a chilling adventure, part ghost story, part myth and partly a Coming of Age Tale. Gwyn and Alison discover a set of plates in the loft (the dinner service for which the book gets its name), and Alison sees almost immediately that she can turn the floral pattern on its face into little paper owls with a little origami. This she does, but soon her tracing of each plate and cutting out the shape of the owl soon becomes an obsession, and it is only Gwyn who realises that something is amiss.

Meanwhile Roger discovers the Stone of Gronw by the river that runs through the Valley, a stone where once the hero from Welsh legend Gronw was killed by Lleu Llaw Gruffydd's, in spite of him stealing away his wife Blodeuwydd.

As Gwyn tries to answer why Alison is becoming 'entranced' with owls, other strange things start to happen; noises are heard in locked rooms and the plaster render on a wall mysteriously flakes away, revealing an ancient mural of woman made of flowers. Added to this confusion are the cryptic pronouncements of Huw Halfbacon the grounds keeper (who seems to know much more about what is happening to the three children than he lets on), and the antagonism that Gwyn's mother Nancy holds for Huw and the English family.

As events race towards a climax, Gwyn tries to escape the valley but to no avail, finally finding out the awful truth that he, Roger and Alison are doomed to repeat the myth of Blodeuwudd, Gronw and Lleu Llaw Gruffydds just as Huw, Nancy and the deceased Bertram (Alison's uncle) once had; which resulted in Bertram's death.

As the English parents are blithely unaware of what is going on, the children have to find a way to reconcile their cultural and emotional differences if they are to avoid suffering a similar tragic fate to all of those other triads of people who have meet their doom here in this valley.

More summaries and resources for teaching or studying The Owl Service.