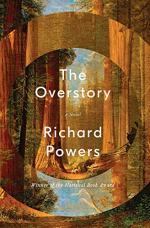 Richard Powers
This Study Guide consists of approximately 87 pages of chapter summaries, quotes, character analysis, themes, and more - everything you need to sharpen your knowledge of The Overstory.

The Overstory Summary & Study Guide includes comprehensive information and analysis to help you understand the book. This study guide contains the following sections:

This detailed literature summary also contains Quotes and a Free Quiz on The Overstory by Richard Powers.

The following version of this book was used to create this study guide: Powers, Richard. The Overstory. W.W Norton & Company. First Edition. 2018.

This novel is comprised of nine main narrators who all seem to be independent humans but by the end of the novel, the readers have discovered their lives are more intertwined than anyone could have ever imagined. Trees bring them together and death tears them apart but for many, they discover new life in death.

First there is Nicholas Hoel, a young man from a long line of farmers who dreams of becoming a sculptor. He loses his family as a young age and begins a nine year project of tree sculptures. These sculptures attract a young woman who leads him on the adventure of a life time. Even after her death, her words give him purpose and meaning, allowing him to create beautiful works of art that tell others the stories of nature.

Then there is Mimi Ma, child of a Chinese immigrant and a Virginian woman. She grows up to become a successful engineer but turns into a devout tree activist when the ponderosa pines outside her office window are sneakily cut down by the city in the middle of the night. She follows her father's talk of enlightenment and it leads to her connections with fellow activists. When they part ways, she becomes a therapist, attempting to undo the wrongs of her past by helping others. Guilt shadows her every step but she keeps living for a man who made the ultimate sacrifice for her.

Adam Appich is a brilliant young man who becomes more cynical with age. He attempts to study the mindset of tree activists, only to get drawn in by their ideology and conviction. He becomes an arsonist with them, drawn in by the words of a woman who hears the voices of trees in her head. But when she dies, he does nothing to help her. Twenty years later, he is betrayed and arrested for his crimes that he originally had no intention of committing. However, it is his arrest that truly opens his eyes to the world of trees and he refuses to give up any of his conspirators.

Ray Brinkman and Dorothy Cazaly, a couple who bicker as much as they love. Dorothy is fiercely independent and Ray would follow her anywhere. The two battle infertility, a love affair and a brain aneurysm, finally connecting over plant identification when Ray is bedridden. They are reminded of their free-spirited daughter and are determined to leave her an inheritance full of wild things.

Douglas Pavlicek is a Vietnam veteran who was saved by a banyan tree. He desperately wishes to stop the clear cutting and to continue keeping the woods pure. He falls in love with Mimi Ma, drawing her into the world of violent protests, where the lawmen do not act within the law. He joins the arsonist but is the one who is eventually caught for his crimes. He betrays Adam in order to protect Mimi and have a lighter sentence.

Neelay Mehta is a young Indian man who dreams of creating a game world exactly like the one humans live in. His quest to do so brings him closer to understanding nature around him and how humans are willingly to destroy it all. He makes learners so that they will understand everything before it is too late and maybe, just maybe, humans can make the world a better place.

Patricia Westerford is a genius in her field, discovering that trees can talk to one another. She is ridiculed at first but then later validated. She devotes her life to studying trees and trying to make her species understand just how special they are. She marries a man who lets her chase that passion and together they start a seed bank in the hopes that they will be able to replant many of the species that will be lost due to deforestation. At the end of the novel, Patricia realizes the best thing mankind can do for the trees is to go into death willingly and so she commits suicide in front of an auditorium full of people.

Finally, there is Olivia, a young college girl who died but was brought back by beings of light. She could hear the voices of the trees and was so charismatic that she rallied four other people to commit serious felonies. She is passionate about protecting the trees and sure that everything would turn out perfect for them. She fell in love with Nick and together they strove to protect one of the last giant redwoods. Even in her failures, she was determined to do as much as she could for the beings who brought her back to life. However, she died during one of the arson attacks and her death signaled the end of the pact the five arsonists had made. But her death did not go unnoticed and even at the end of the novel, there is the hope that it could bring about some change.

More summaries and resources for teaching or studying The Overstory.

The Overstory from BookRags. (c)2022 BookRags, Inc. All rights reserved.