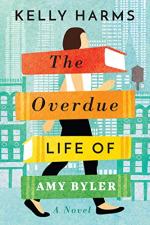 This detailed literature summary also contains Quotes and a Free Quiz on The Overdue Life of Amy Byler by Kelly Harms.

The following version of the novel was used to create this study guide: Harms, Kelly. The Overdue Life of Amy Byler. Lake Union Publishing, May 1, 2019. Kindle.

In the novel, The Overdue Life of Amy Byler by Kelly Harms, when Amy Byler’s husband returns three years after he abandoned her and their two children, Amy suddenly has a chance to get a taste of what life would be like without children. Amy has a makeover, falls in love with a fellow librarian, and learns to take care of herself again. She fears, however, that she will never be able to enjoy life with her children again when tragedy strikes, forcing Amy to realize that she can love her children, and still attend to her own needs.

Amy is shocked when she sees her husband, John, at the drugstore in her small town in Pennsylvania. It is the first time she has seen him since he went to a meeting in Hong Kong and never returned. He tells her that he is back and wants to reestablish a relationship with their children, 15-year-old Corrine “Cori” and 11-year-old Joseph “Joe”. At first Amy refuses, but then decides to allow her children to make the choice. They agree to stay with their father a week at the beginning of summer.

Amy decides to attend a library conference at Columbia University during the week her children are away. At the conference, she meets Daniel Seong-Eason, a librarian who is interested in Flexthology, a method of encouraging struggling readers that Amy lectured about at the conference. The two meet up for coffee and to brainstorm a selection of diverse books for the program but wind up sleeping together. Amy, who still imagines perhaps she and John can mend their relationship, feels guilty but cannot stop thinking about Daniel.

While in New York, Amy connects with Talia, a former roommate from college, who lives in New York. Talia, the editor for the women’s magazine Pure Beauty, uses the opportunity to make Amy the highlight of a trend article detailing what Talia calls momspringa. The idea is similar to the Amish Rumspringa, a time when adolescents are exposed to the modern world before they settle in to be adults. In Talia’s mind, momspringa is a time for mothers to have a chance to pamper themselves. Amy is given a makeover, trendy clothes, signed up for a Flywheel class, and listed on a dating app. Matt, Talia’s associate, tweets out the details of Amy’s momspringa in advance of an article.

Meanwhile, John’s time with the kids is going so well that they had decided to stay with him for the rest of the summer. Because she will be in New York longer, Amy and Daniel begin spending time together again as friends, neither wants to get his heart broken, but soon they cannot deny that they are falling in love. It is a conversation with Daniel’s daughter, Cassandra, that gets Amy wondering if she is using her time in New York just to run away from her responsibilities. She panics because she believes she is no better than John when he left his family. Amy breaks off the relationship with Daniel and heads home the day before Joe will leave for Space Camp and Cori will leave for diving camp.

John and Amy drive Joe to the airport and Cori to her camp the following day. In the car on the drive home, Amy is reminded of the baby she miscarried. When she asks John if he thought things would have been different if she had carried the baby to term, he admits he did not want another baby. Amy remembers how lonely she was during that period in her life because John did not support her or comfort her the way she needed to be supported.

Amy’s thoughts are disrupted when she receives a phone call from a hospital informing her that Cori hit her head on the diving board and is suffering a traumatic brain injury. At the hospital, the surgeon tells Amy and John that Cori needs surgery right away. John breaks down, unable to handle the stress, leaving Amy to handle the tragedy alone. As she watches John sleep in the waiting room while their daughter is in surgery, Amy realizes that John actually did her a favor when he left her. Shortly afterward, Amy’s best friend, Lena, Talia, and Daniel join Amy at the hospital to support her through Cori’s injury.

Cori survives her injury with no brain damage. John goes back to Hong Kong but arrangements are made for Cori and Joe to spend their Christmas vacation with him. Amy begins officially dating Daniel. She has concluded that there is more than one way to be a good mother. She can take care of her kids, and take care of herself and her own needs as well.