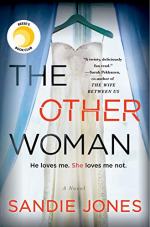 Sandie Jones
This Study Guide consists of approximately 40 pages of chapter summaries, quotes, character analysis, themes, and more - everything you need to sharpen your knowledge of The Other Woman.

The Other Woman: Novel Summary & Study Guide includes comprehensive information and analysis to help you understand the book. This study guide contains the following sections:

This detailed literature summary also contains Quotes and a Free Quiz on The Other Woman: Novel by Sandie Jones.

The following version of this book was used to create this study guide: Jones, Sandie. The Other Woman. St. Martin's Press, 2018. Kindle Edition.

The novel begins with a prologue in which Pammie narrates in the first-person present tense. She says that she is going to stop Emily’s wedding to Adam from ever happening. After the prologue, the narration switches to Emily’s first-person past tense narration. She said that she met Adam when she was at a work function. He was in the bar and had cut in front of her in the queue, which made her angry, but then he bought her a drink. She flirted with him all night and later told her best friends, Pippa and Seb, about the encounter. They were both excited for her. Adam called her and asked her out on a proper date, and Emily was ecstatic. They spent a month together, hanging out almost every day. Emily introduced Adam to Seb, who said he thought Adam was nice, but there was something he could not figure out about him.

The novel skips forward in time and Adam and Emily went to go meet his mother, Pammie. On the way, Emily made a joke about the music Pammie listened to, and Adam snapped at her and threatened to call off the whole day. Emily apologized and they went to see Pammie, who showed Emily photographs of Adam. When they went to fetch lunch, Emily saw a picture of Adam with an ex-girlfriend. Pammie had written: “Darlin Rebecca, miss you every day” (29) on the back, which made Emily suspect that Rebecca was dead. Emily went home and discussed everything with Pippa. Emily and Adam decorated a Christmas tree together, and she asked him about Rebecca. He was vague about the whole thing and said things had not worked out.

Adam invited Emily to Christmas dinner, but she said she would only be able to make it for tea, because she wanted to eat with her family. She told Pammie the same thing, but when she arrived she found that Adam, his brother James, and Pammie had waited to eat with her. They insisted she eat everything, and then Pammie asked her to sleep on the couch.

Pammie took Emily and Adam out for Emily’s birthday. She warned Emily to give Adam his space, and Emily was offended. Emily and Adam decided to move in together. Emily saw a mean text from Pammie to Adam, and started to suspect that Pammie was out to sabotage her.

James started texting Emily and they flirted a bit. Emily took her parents to Adam’s birthday party to meet him. He gave a toast and proposed marriage to Emily. She said yes, but Pammie fainted and the ambulance had to be called. The doctors said she was dehydrated, and Adam insisted that she had to stay with them while she recovered. Emily grew frustrated with Pammie’s presence and tried to escape by going to stay with Seb, but Adam forced her to come back home. Emily seduced Adam and Pammie walked in on them. She left, horrified, and Adam was furious at Emily for what she had done. They stopped being intimate with one another.

James texted Emily and told her he was in town and wanted to meet up. Emily and Adam went to have lunch with Pammie. Emily yelled at Pammie and told her she was ruining her relationship. Adam and Emily did not talk for days, and then finally Adam brought up the elephant in the room. He said Emily had to try and make more of an effort with his mother for the sake of their relationship. Emily agreed and they tried to have sex, but Adam was unable to perform.

James called Emily and they met up. He asked her if everything was okay with her and Adam. She wanted to tell him the truth, but she left instead. She met up with him again, and nearly kissed him, but again she left. She went home and finally had sex with Adam, then asked him about Rebecca. He said she had died from an asthma attack.

Emily went on her bachelorette trip in Portugal and was furious to find that Pammie had invited Charlotte, her old best friend who had slept with her ex-boyfriend. Back home in London, James came over and told Emily that she deserved better than Adam. Adam came home and James left.

At the rehearsal dinner, Pammie announced she had cancer, and Adam decided to call off the wedding. Emily was furious and assumed Pammie was faking her illness. Emily set out to prove it, and discovered an inhaler in Pammie’s drawer next to a photograph of Rebecca that made Emily think Pammie had killed Rebecca. Then Emily discovered Pammie at a coffee shop rather than her chemo appointment, but Pammie threatened to tell Adam about James if she said anything. She said she had asked James to speak with Emily in the first place, and knew all about their relationship.

Emily went home and felt sick, and soon realized she was pregnant. Adam was less than thrilled, and became more controlling and temperamental during her pregnancy. Adam was disappointed when Emily gave birth to a girl. Pammie came over and took the baby for a walk without asking permission, and Emily had a breakdown. She yelled at Pammie and Adam and told them she never wanted to see Pammie again.

James got married to his new girlfriend, Kate. Emily went because Adam said he was taking the baby with or without her. During the reception, Emily caught Adam sleeping with another woman in the garden. Emily kicked him out and let him back two weeks later. He told her that Pammie’s cancer was back and worse than ever. She held a christening for the baby, and was shocked to see that Pammie did look sick. Adam went out with his friends to drink and Emily went home and fell asleep.

Emily woke up to her phone ringing. Pammie told her not to let Adam in, because he knew about James. Emily ignored her advice and went downstairs to let Adam in. He physically attacked her and nearly hurt the baby, but Pammie and James showed up with the police, who arrested Adam. Pammie admitted that she had been trying to warn Emily away from Adam the entire time, but had been reluctant to say anything directly because Adam knew a devastating secret about the abuse she suffered in her past. In the epilogue, Pammie narrates another section in present tense in which she is joyful that she and Emily are friends, and grateful that she has time to be with her granddaughter before her cancer gets worse.

More summaries and resources for teaching or studying The Other Woman: Novel.

The Other Woman: Novel from BookRags. (c)2022 BookRags, Inc. All rights reserved.