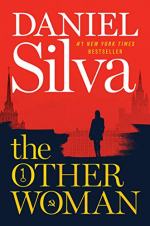 The Other Woman: A Novel Summary & Study Guide

Daniel Silva
This Study Guide consists of approximately 70 pages of chapter summaries, quotes, character analysis, themes, and more - everything you need to sharpen your knowledge of The Other Woman.

The Other Woman: A Novel Summary & Study Guide Description

The Other Woman: A Novel Summary & Study Guide includes comprehensive information and analysis to help you understand the book. This study guide contains the following sections:

This detailed literature summary also contains Quotes and a Free Quiz on The Other Woman: A Novel by Daniel Silva.

The following version of this book was used to create the guide: Silva, Daniel. The Other Woman. HarperCollins, 2018.

The novel consists of 88 chapters, spanning four parts. The title of each part foreshadows the events to come. The novel usually moves in chronological order of events. The Prologue details a child’s arrival in Moscow in 1974. Much of the novel takes place from the point of view of the protagonist Gabriel Allon, though certain chapters change perspective.

The novel begins with an explanation of how a Russian agent, code-named Heathcliff, came to act as an informant for Israeli intelligence. After a long period of acting as a double agent and passing information to the Israelis, Heathcliff encountered a monumental piece of forged American intelligence that required his defection to the West. The Israelis organized an exfiltration in Vienna. As Heathcliff approached the safe house, a Russian assassin appeared on a motorcycle and killed him.

The murder turned into an international incident. The Israelis took the fall, standing accused of murdering a Russian national. In order to clear his name, Gabriel began an investigation into who could have known the location of the safe house. The inquiry cleared the name of the Israeli agents, so Gabriel concluded that there must be a mole within MI6, who had worked jointly on the extraction. Gabriel voiced these concerns to Graham Seymour, the head of MI6, and Seymour asked Gabriel to surveil Alistair Hughes, the MI6 Head of Station in Vienna, who also knew the location of the safe house.

Their surveillance of Hughes revealed that he frequently traveled to Bern without explanation. The Israeli team, comprised of Gabriel and several Israeli operatives, witnessed a hand-off of documents between Hughes and a Russian operative. Hughes burned the documents and tried to flee the hotel, but a car struck and killed him in a hit-and-run. At first, Gabriel believed that he had found the mole, but he questioned Hughes’s premature death. He therefore looked deeper into Hughes’s frequent visits to Bern and discovered he had not been travelling to meet with a Russian handler, but instead to receive treatment for manic depression at a private Swiss clinic.

Gabriel related this information to Graham Seymour, and the two realized that the Russians wanted them to conclude that Hughes was the mole in order to conceal their identity. Gabriel resolved to find the real mole, and so enlisted the help of Uzi Navot, the previous head of Israeli Intelligence. Navot met with a contact within the Austrian government, Werner Schwarz, who revealed that he himself had been working for a Russian handler named Sergei Morosov and passing Wester intelligence to the Kremlin for money. Morosov worked in Germany at a business front, and so the Israelis conducted an operation in Strasbourg to kidnap and force defection upon Morosov.

The operation was successful, and once back in Israel Gabriel interrogated Morosov as to the identity of the mole. Morosov confessed that he worked directly under a shadowy figure within the KGB named Sasha, who created a program with legendary historical defector Kim Philby in the sixties and seventies to plant a mole within MI6. The plan revolved around the offspring of Kim Philby and a woman he had known in Beirut in the sixties, who Morosov revealed to be one Charlotte Bettencourt. After some investigation, Gabriel found Charlotte living in Spain in a small village in Andalusia.

After arriving in Andalusia, the team drove Charlotte to Seville, where Gabriel conducted another interrogation. He learned that the mole was none other than Rebecca Manning, MI6’s Head of Station in Washington. She was also the daughter of Charlotte and Kim Philby and had been trained in Moscow since childhood to be a deep-cover operative. Gabriel took this information to Graham Seymour, and the two began to develop a plan to arrest her in Washington.

During his interrogation of Morosov, Gabriel learned the location of one of the dead drops in Washington used by Russian operatives to get information back to Moscow without detection. Another undercover Russian named Eva lived in Washington. Eva picked up Manning’s Intel at specified dead drop points around the city, one of which took place in a gray Ford Explorer. The team set up a surveillance post and followed Eva as she picked up the drop. They confronted her and turned her against the Russians, promising immunity for her cooperation in arresting Manning. Eva gave them the location of the next Intel drop, a Starbucks in the middle of the city where Manning would wirelessly transfer files to a device provided to Eva by the SVR.

Gabriel arranged surveillance in the Starbucks and watched remotely as the exchange took place, hoping to capture incriminating evidence of Manning’s treachery. However, a last minute anonymous text message tipped her off, and she surreptitiously escorted Eva out of Starbucks at gunpoint. The two escaped Gabriel’s pursuit and rendezvoused with a Russian exfiltration team who would take them back to Moscow.

Gabriel and Graham disbanded the operation. The team dispersed leaving only Gabriel behind in Washington. Gabriel received a call from a contact within the CIA who told him Eva and Manning’s last known location, and Gabriel realized where Manning was heading. He raced out to a location on the bank of the Potomac River where Manning’s father, Kim Philby, had allegedly buried a KGB camera and film, believing that Manning would retrieve them before leaving Washington.

Manning arrived with Eva and two Russian agents. Gabriel killed the two agents and struggled with Manning for her gun, during which a stray bullet killed Eva. Manning was arrested just as Gabriel’s backup arrived, and the team, now again reunited, boarded a flight to London. Gabriel returned to Israel, but soon flew again to London to meet with Graham who was now facing severe recriminations for allowing a mole into such a high position within MI6. Gabriel realized it was Graham who had tipped her off in the Starbucks because he would rather she return quietly to Moscow than MI6 have to face a scandal.

The Russians, the British, and the Americans arranged an exchange of Manning for a dozen captured Western intelligence officers. The novel concludes with Gabriel returning a final time to Spain, where he met once again with Charlotte Bettencourt in a church and expressed his belief that Manning would continue to be a danger to the West.

More summaries and resources for teaching or studying The Other Woman: A Novel.

The Other Woman: A Novel from BookRags. (c)2022 BookRags, Inc. All rights reserved.