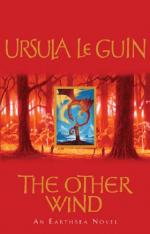 The Other Wind Topics for Discussion

Ursula K. Le Guin
This Study Guide consists of approximately 39 pages of chapter summaries, quotes, character analysis, themes, and more - everything you need to sharpen your knowledge of The Other Wind.

What makes Alder an unlikely hero in 'The Other Wind' by Ursula Le Guin? What are his strengths and weaknesses?

How can King Lebannen's and Princess Seserakh's relationship said to be symbolic of the theme of Mending in 'The Other Wind?'

Is the magic of the Archepilego necessarily a bad thing? Should Alder have given his magic away as he does for Seppel?

Why are the Dragons so angry with the humans of Earthsea?

Consider the significance of the character of Tehanu. What does she represent in the novel, and how does her character change towards the end of the novel 'The Other Wind' by Ursula Le Guin?

Consider the growing friendship of Lord Onyx the wizard of Roke and Seppel the Pelnish Wizard in 'The Other Wind.' In what way does it represent the major themes of the book, and, what...

More summaries and resources for teaching or studying The Other Wind.

The Other Wind from BookRags. (c)2023 BookRags, Inc. All rights reserved.