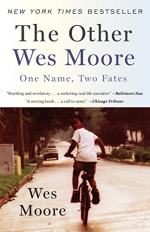 Important People in The Other Wes Moore: One Name, Two Fates

Wes Moore, the author of this book, started out life in a bad neighborhood in Baltimore. He was drawn to trouble. He pushed the limits without breaking them too often. His most heinous crimes involved graffiti and smoke bombs. Still, his mother saw the path down which he was headed. To stop him, she sent him to military school. After a very rocky beginning, military school did what it was supposed to do which was to straighten out a kid who was at risk. It inspired him to continue service in the military for quite some time. He also ended up with several political jobs. Eventually, he got married and worked on Wall Street.

The other Wes Moore had very similar beginnings in that he grew up on the streets of Baltimore. The differences were that his father was alive...

The Other Wes Moore: One Name, Two Fates from BookRags. (c)2022 BookRags, Inc. All rights reserved.