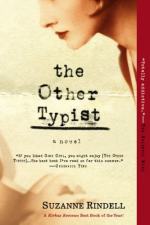 The Other Typist Summary & Study Guide

Suzanne Rindell
This Study Guide consists of approximately 41 pages of chapter summaries, quotes, character analysis, themes, and more - everything you need to sharpen your knowledge of The Other Typist.

The Other Typist Summary & Study Guide includes comprehensive information and analysis to help you understand the book. This study guide contains the following sections:

This detailed literature summary also contains Quotes and a Free Quiz on The Other Typist by Suzanne Rindell .

The Other Typist is told from the first-person narration of Rose Baker, who is currently confined to a mental hospital. She recalls the events that led her to her confinement. She begins with her time in New York City in 1925 in the age of Prohibition, when Rose was a typist in a police precinct, typing up the confessions of murderers, sitting in the interrogation room with the Sergeant. Her life appeared to be simple. She worked during the day and lived a quiet life at a boarding house. When Odalie, a new typist, was brought on board, Rose fixated on the young woman. Odalie was vibrant, exuded sex appeal, wore flapper dresses and cut her raven-colored hair in a chic bob.

Odalie dropped a brooch one day as she left the precinct. Rose picked it up, and instead of telling Odalie about, tucked the brooch into her desk drawer. Rose then took it upon herself to keep a close eye on Odalie. She kept a notebook full of her observations about Odalie, from her own thoughts about her to Odalie’s work habits and social calendar.

Odalie and Rose struck up a friendship. After Rose learned of a betrayal by Dotty, the woman who ran the boarding house, Odalie invited Rose to move in with her. While Rose was nervous to make the move, she took Odalie up on her offer and moved into the hotel suite with Odalie. Rose questioned how Odalie was able to afford the suite, and Odalie explained that her family has money. Odalie took Rose to a speakeasy, introduced Rose to her finance Gib, and Rose got drunk on champagne cocktails. Rose felt scandalous out drinking and dancing, but could not seem to say no to Odalie. She felt like she was being tested and she felt a need to belong. She believed Odalie to be her kindred spirit.

Odalie took Rose on a vacation to a beach house. Rose felt out of place, especially since Odalie decided to show up without an invite. While at the beach house, they encountered Teddy Tricott, a young man whose cousin Warren was killed in a train accident years earlier. Teddy recognized Odalie, but Odalie insisted she did not know him. While Rose was out for a swim, Teddy swam out to talk to her on a floating dock. He explained that Warren was engaged to a woman named Ginevra who bears a striking resemblance to Odalie. After Warren’s death, Ginevra disappeared and Teddy thought Odalie might be her. Not long after their conversation, Rose and Odalie left the beach house.

Back in the city, Rose questioned Gib about Odalie. He tried to talk her through what was happening, but Rose remained insecure. When Teddy encountered Rose in the city, she took him back to the hotel suite to settle the matter with Odalie. Odalie sent Rose out for cigarettes, and when Rose returned, she heard police sirens. Teddy was pushed off the hotel balcony and fell to his death. Once inside the hotel, the hotel employees identified Rose as the woman who went upstairs with Teddy. Rose has a flashback to Teddy’s fall and realized she was responsible.

More summaries and resources for teaching or studying The Other Typist.

The Other Typist from BookRags. (c)2022 BookRags, Inc. All rights reserved.