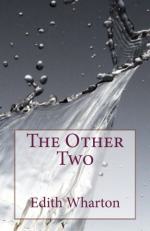 The Other Two (Short Story) Characters

Edith Wharton
This Study Guide consists of approximately 22 pages of chapter summaries, quotes, character analysis, themes, and more - everything you need to sharpen your knowledge of The Other Two.

Mr. Waythorn is the story’s point-of-view character. He is a successful business/financial manager who lives in the New York City area. He is in his late thirties and has recently married Alice, a woman in her mid-thirties who has been married and divorced twice. At first, Mr. Waythorn feels profound happiness in the marriage, but soon, he becomes uncomfortable whenever he encounters Alice’s previous husbands. Mr. Waythorn feels possessive of Alice, and his insecurities become exacerbated by the fact that Alice generally evades questions about her ex-husbands. Mr. Waythorn continues to struggle with these insecurities and possessive habits. The story ends in a fairly abrupt, ambiguous way. It remains possible that Mr. Waythorn and Alice might not be able to overcome these challenges.

Alice is a woman in her mid-thirties. At the age of 17, she married Mr. Haskett. Alice and Haskett had a...

More summaries and resources for teaching or studying The Other Two (Short Story).

The Other Two (Short Story) from BookRags. (c)2022 BookRags, Inc. All rights reserved.