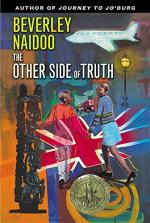 The Other Side of Truth Summary & Study Guide

Beverley Naidoo
This Study Guide consists of approximately 45 pages of chapter summaries, quotes, character analysis, themes, and more - everything you need to sharpen your knowledge of The Other Side of Truth.

The Other Side of Truth Summary & Study Guide Description

The Other Side of Truth Summary & Study Guide includes comprehensive information and analysis to help you understand the book. This study guide contains the following sections:

This detailed literature summary also contains Quotes and a Free Quiz on The Other Side of Truth by Beverley Naidoo.

The following version of this book was used to create this study guide: Naidoo, Beverley. The Other Side of Truth. HarperCollins, 2000.

After their mother is shot and killed outside of their home in Nigeria, siblings Sade and Femi are smuggled out of the country by their father, a prominent journalist in opposition to the national corruption and military violence. When the children arrive in England to meet their uncle and wait for their father to arrive, they discover that their uncle has gone missing and they have no family to look after them. They attempt to make their own way in London before they are robbed and later mistaken for thieves. After this, the children are taken in by English social services workers and placed with Mrs. Graham, a foster mother in London.

Sade and Femi seek out the foods and sensations of Nigeria, often fixated by the features of London, such as the food stands selling plantains and yams, that remind them of home. When they begin living with their first foster mother, they find themselves unable to open up to her and share their story, living in fear that their illegal immigration status will see them deported back to the danger awaiting them in Nigeria. Eventually, they are categorized as refugees and brought to live with another foster family while undertaking the paperwork to allow them to stay in England and begin going to school. They must go through complicated immigration proceedings with their social worker, a fact which angers Femi, especially when he must be fingerprinted.

When Sade and Femi arrive at the King residence, their new foster home, a kindly Jamaican family greets them. Both children have their own rooms, and Sade spends the afternoon reading magazines on her bed. They eat dinner together, and Mrs. King prepares fried yams, fried plantains, and spinach soup, a Nigerian recipe. The children sit mostly in silence while Mr. and Mrs. King carry on their own conversation. Sade begins to dread the possibility of going to school soon.

When Sade and Femi begin attending school, Sade encounters difficulties with bullies. She attempts to protect Femi, neglecting her homework in order to prevent the bullies from beginning to harass him too. She does, however, meet a Somali girl named Mariam and the two quickly become friends. Despite this, Femi descends into hopelessness as the days continue to pass without any word from the children’s father. Femi also grows further away from Sade, causing confusion and a saddening rift in the sibling’s relationship.

The children continue their daily lives without any new information about their father, a constant source of sadness and stress. The school bullies pressure Sade into stealing a lighter from Mariam’s family corner shop and she does so, causing her shame, especially when Mariam reveals the story of how she became a refugee and was forced to flee Somalia with her mother and brother.

Sade and Femi learn that their father is being held in a British immigration detention facility for attempting to enter the country illegally. This knowledge serves as a beacon of hope for the children, allowing them some small measure of happiness. Sade and Femi’s father writes them letters from the detainment facility, promising to see them again soon and waiting together until it is safe to return home to Nigeria. Sade begins brainstorming ideas about how to help her father, focusing on her interest in the nightly newscast. She decides to contact the news station and see if the newscaster will pick up her story.

Sade and Mariam rekindle their friendship and the television report continues to relay the information that their father is seeking asylum in England and faces outstanding arrest warrants and threats to his life if he were to attempt to return to Nigeria. Sade and Femi maintain their hope that their father will soon be released from the prison although he has since begun a worrying hunger strike.

The children prepare for the Christmas holiday season, lifting their spirits. When their father does not call at his usual time, Sade and Femi worry that something horrible has happened to him. He is in the hospital regarding complications with his hunger strike. The children sleep worriedly, awakening to find their father knocking on the door with Uncle Dele. The family reconciles and shares the details of their extensive separation. The novel ends with Sade writing a letter to her grandmother, telling her how much she misses her grandmother and how she will never forget her mother.

More summaries and resources for teaching or studying The Other Side of Truth.

The Other Side of Truth from BookRags. (c)2022 BookRags, Inc. All rights reserved.