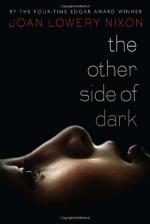 The Other Side of Dark Summary & Study Guide

Joan Lowery Nixon
This Study Guide consists of approximately 52 pages of chapter summaries, quotes, character analysis, themes, and more - everything you need to sharpen your knowledge of The Other Side of Dark.

The Other Side of Dark Summary & Study Guide Description

The Other Side of Dark Summary & Study Guide includes comprehensive information and analysis to help you understand the book. This study guide contains the following sections:

This detailed literature summary also contains Topics for Discussion on The Other Side of Dark by Joan Lowery Nixon.

"The Other Side of Dark" by Jean Lowery Nixon is the story of a seventeen-year-old girl who wakes from a four-year-long coma and must face the changes that have occurred in her life, including the fact that her mother was murdered by the same man who shot and put Stacy in a coma. When Stacy McAdams wakes from her coma after four years to learn that she is the only one who can identify her mother's murderer, she has to recall his face. She struggles to regain her memory of that day before the killer finds her. "The Other Side of Dark" is an intriguing, suspenseful novel that deals with issues of growing up at once and who can be trusted. The story is set in a narrative filled with murder and mystery.

Waking from a long dream, Stacy believes she is in the wrong body until she learns she has been in a coma for four years. When she is told that Mom was killed on the same day she was shot, Stacy remembers the guy who shot her, but she cannot see his face. Unfortunately, she mentions this to a reporter whose article claims Stacy can identify Mom's murderer, causing Stacy to worry that the killer will find her before she can remember who he is. Once Stacy goes home, Jan, her best friend, introduces her to Jeff, a new guy who seems interested in Stacy. While babysitting for the neighbors, Stacy sees a shadowy figure trying to peer in her windows, but the police dismiss this as her overactive imagination. A whispering voice calls and threatens Stacy, telling her she should just forget and that he has a friend. At Tony's party in Stacy's honor, Jarrod Tucker spikes Stacy's drink and leads her outside to see his new car, but Jeff is there to protect Stacy when she recognizes Jarrod as Mom's murderer. Stacy thinks it is odd that Jeff drives her home without asking where she lives.

After Jarrod is arrested and Stacy identifies him in a lineup at the police station, he sees her in the hallway and again threatens her with his friend. Stacy tries to figure out who Jarrod's friend is as she continues to spend time with Jeff, but when Tony tells her that he has seen Jeff with Jarrod, she does not want to believe that Jeff would hurt her, despite the fact that Jeff seems to be hiding something. During Jarrod's hearing, Jarrod has a seizure and is taken to the emergency room. At home, Stacy learns that the car that her neighbor has seen patrolling their street actually belongs to Jeff.

Ignoring multiple phone calls, Stacy considers the possibility that Jeff is Jarrod's friend. She hears a rattling noise in the garage as the news reports that Jarrod escaped. Stacy hides in the rickety tree house in the backyard, but Jarrod knows where she must be and threatens her with his friend, his gun. Deciding not to let Jarrod get his way, Stacy pushes the tree house on top of him, grabs his gun and points it at him. Though she hates Jarrod enough to kill him, Stacy cannot do it when she thinks of Mom and so she calls for help to the neighbor who has already called the police. Jeff arrives and takes the gun from Stacy, explaining that he is an undercover police officer. After Jarrod is arrested, Jeff explains he was working undercover for the narcotics squad at the high school and Stacy became part of his assignment because they felt she was in danger; however, Jeff asked to be taken off the assignment because he has feelings for Stacy. He wants to be Stacy's true love and is willing to wait. Stacy finally accepts that she is seventeen years old and that she definitely is in the right body.

More summaries and resources for teaching or studying The Other Side of Dark.

The Other Side of Dark from BookRags. (c)2022 BookRags, Inc. All rights reserved.