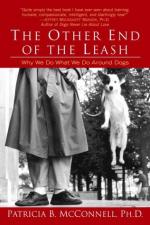 The Other End of the Leash: Why We Do What We Do Around Dogs Summary & Study Guide

The Other End of the Leash: Why We Do What We Do Around Dogs Summary & Study Guide Description

The Other End of the Leash: Why We Do What We Do Around Dogs Summary & Study Guide includes comprehensive information and analysis to help you understand the book. This study guide contains the following sections:

This detailed literature summary also contains Topics for Discussion and a Free Quiz on The Other End of the Leash: Why We Do What We Do Around Dogs by Patricia McConnell.

The Other End of the Leash by Patricia B. McConnell is a "root cause" approach to dog training and ownership. In her position as an Applied Animal Behaviorist, ethologist, and longtime dog lover, McConnell examines how dog behavior relates to ancestral canid behavior (wolves) and compares to our own primate tendencies. Using this knowledge will allow humans to better understand dog behavior in order to control dogs and maintain a happy home.

While humans show affection and companionship with closeness, touching, kissing, and hugging, dogs are quite different. Closeness, direct eye contact, head petting, and hugging are all "rude" gestures to dogs, gestures which they take as a sign of an owner asserting undue dominance. Dogs, and especially strange dogs, should not be subject to such gestures until they are fully familiarized with a human.

Dogs are very visual. They are especially attune to shapes; an owner who comes home with a large hat on may look like a completely different person than the hatless owner they are accustomed to. They also respond to minute differences in their owner's body and posture. A mere leaning forward may be enough to telegraph aggression to a dog. To take the aggression from a dog, one should lean backward, avoid eye contact, move slowly, and maintain a generous distance.

In the world of vocal instructions to dogs, owners should make efforts to maintain consistent commands. For example, "Come" and "Here, boy, come" sound like two entirely different things to a dog while we understand they are variations of the same command. Even, normal volume tone should be used; yelling at a dog shows a dog that an owner is not in control.

Like us, dogs are highly socialized animals, and this socialization must be understood. During the first months of a puppy's life, known as the sensitive period, it is crucial that the dog be introduced in a positive way to as many humans as possible, in order to breed familiarity with owners and strangers alike. Abused or neglected dogs who pass by their sensitive period without this acclimation usually develop behavior problems that run deep and many times cannot be cured.

Dominance is a misunderstood term in dog training. The author recommends against the advice of many dog trainers, that is, to establish dominance over a dog with "alpha rollovers" or punishment. Instead, the theory of "benevolent leadership" is encouraged, in which an owner behaves with confidence, politeness, positive reinforcement, and clear leadership, and never with yells, threats, and physical violence.

The author also emphasizes the fact that dogs have personalities, and just as with human friends, owners should evaluate a dog's personality tendencies and determine if that personality meshes well within the human family. Breed, though it can tell a lot about a dog, should not be confused with personality. In the end, should owner and dog be completely incompatible, it is more humane to find the dog a new home (rehoming) than it is to force both parties to continue to suffer, even if there is a lot of love and affection involved.