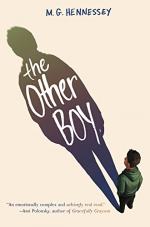 The Other Boy Summary & Study Guide

Hennessey, M. G. and Monster, Sfe R.
This Study Guide consists of approximately 39 pages of chapter summaries, quotes, character analysis, themes, and more - everything you need to sharpen your knowledge of The Other Boy.

The Other Boy Summary & Study Guide includes comprehensive information and analysis to help you understand the book. This study guide contains the following sections:

This detailed literature summary also contains Quotes and a Free Quiz on The Other Boy by Hennessey, M. G. and Monster, Sfe R..

The following version of this book was used to create the guide: Hennessey, M. G. The Other Boy. Harper Collins, 2016.

The Other Boy begins with Shane, the novel’s 12-year-old first-person narrator, and his best friend, Josh, arguing over a qualifying baseball game. Though Shane is the star pitcher for their team, the Cardinals, he must miss the big game for an important trip to visit his father in San Francisco. Throughout their prolonged discussion in which Josh fights to convince Shane that the Cardinals will lose their opportunity to compete in the regional championships without him, Shane repeatedly wishes that he could tell Josh the real purpose for his excursion.

After Shane and his mother, Rebecca, complete their journey from Los Angeles to San Francisco, she drops Shane off for an overnight visit with his father, Adam. Adam quickly introduces Shane to his fiancée, Summer, who offers Shane a position as a bridesmaid in their upcoming wedding because Adam failed to inform her that Shane is transgender. Overwhelmed with feelings of hatred for Adam, Shane asks Rebecca to collect him. The next morning, Shane and Rebecca meet with Dr. Anne, a physician who specializes in treating transgender children. Shane finally reveals that attending this appointment was his primary motivation for traveling to San Francisco. But before Dr. Anne can prescribe Shane the testosterone injections that would enable his natural transition through male puberty, Adam arrives and refuses to provide consent for Shane to begin treatment.

Devastated with the outcome of his trip, Shane returns to school and discovers that the Cardinals won their baseball game. During a tense conversation with Nico, a bully who plays baseball for the notorious Mustangs, Shane accidentally discloses information that could jeopardize his carefully maintained identity as a boy at McClane Junior High. After baseball practice that evening, Shane finds Adam waiting for him in the school parking lot. Though Adam initially reiterates his justification for opposing testosterone injections, he ultimately concedes.

The next day, Madeline, Shane’s crush, invites him for dinner with her family, and he agrees. Though exuberant about dating Madeline and finally securing his testosterone injections, Shane encounters a new dilemma: a school rumor that Shane is a girl. Terrified of interacting with his suspicious peers, Shane flees McClane Junior High. After Rebecca convinces Shane to return to school, he endures a hostile confrontation with Dylan, a member of the Cardinals and friend of Nico’s. Though Josh defends Shane before the team, Shane takes additional precautions to silence their uncertainty about his sexuality by arranging a sock in his underwear for everyone to observe as he changes into his baseball uniform. That night, Shane shares a pleasant meal with Madeline and her family.

Soon after, Shane and Rebecca attend a PFLAG meeting where Shane reconnects with a transgender friend named Alejandra. She and Shane become buddies intended to support one another through any struggles they encounter as transgender youth. While walking to school the following Monday, Shane discovers that Nico sent the entire school a mass text with a photo of Shane as a girl. Upon arriving at McClane Junior High, Principal Newell summons Shane to his office for a meeting with Nico. Despite Principal Newell’s offer for Shane to return home, he completes the school day with the help of encouraging texts from Alejandra.

When Shane suffers ceaseless bullying at school over the ensuing days, Josh attempts to resolve his predicament by delivering a speech that concludes with Josh prompting Shane to reveal his genitals. After Shane refuses to expose himself, he hides at home for several days, neglecting to eat, sleep, or bathe regularly. Only a visit from Alejandra inspires Shane to continue his journey toward self-acceptance.

Soon after, Adam and Summer arrive to support Shane at the regional championships, and Shane explains the circumstances that prevent him from pitching in the big game. When Josh visits Shane unexpectedly the following morning, Shane learns that he maintained not only his best friend but also his position pitching in the regional finals. That afternoon, Shane wins the game by striking out Nico.

The novel ends with Shane, Josh, and Alejandra celebrating Adam and Summer’s wedding. Shane explains that though he and Madeline never resumed dating, they remained friends. Similarly, while Nico transferred to a military academy, Dylan and a few other students continued bulling Shane. Despite these imperfections, Shane ultimately feels hopeful that eventually everyone will accept him for his true self.

More summaries and resources for teaching or studying The Other Boy.

The Other Boy from BookRags. (c)2022 BookRags, Inc. All rights reserved.