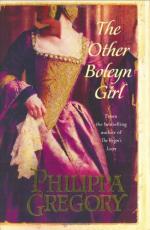 Philippa Gregory
This Study Guide consists of approximately 76 pages of chapter summaries, quotes, character analysis, themes, and more - everything you need to sharpen your knowledge of The Other Boleyn Girl.

The Other Boleyn Girl Summary & Study Guide includes comprehensive information and analysis to help you understand the book. This study guide contains the following sections:

This detailed literature summary also contains Topics for Discussion and a Free Quiz on The Other Boleyn Girl by Philippa Gregory.

The Other Boleyn Girl is Philippa Gregory's story of Mary Boleyn. Mary Boleyn was the beloved younger sister and bitter rival of Anne Boleyn, who became Queen of England and second wife to King Henry VIII. The story is told by Mary Boleyn, whose narrative transforms as she matures and discovers her own true values and her more authentic self. Mary, Anne, and George Boleyn are siblings who are often in collusion as they conspire, under their family's orders, to rise in the king's court.

The Boleyn family, in connection with the powerful Howard family, works tirelessly to advance the two sisters and their brother within the ranks of the king's court, even encouraging young Mary's adulterous affair with the insecure young king. As handmaidens to King Henry's wife, Queen Katherine of Aragon, Mary and Anne Boleyn compete for the king's favor under the direction and control of their heavy-handed Uncle Howard. However, after producing two illegitimate children through her affair with the king, Mary is allowed to return to her husband, William Carey. Her children awaken in Mary a love and compassion that is absent in her immediate family. Having been raised to be a courtier, Mary learns to appreciate nature and the simple farming life outside of court.

A tale of unbounded ambition and cloying competition, The Other Boleyn Girl offers a fascinating look into the era of England's feudal caste system where bloody ruthlessness, corrupt politics, decadent luxury, vicious rivalry, and superstition are the norm. Although most people are aware of Anne Boleyn's fate, Gregory has fleshed out the story for us with human emotions and obscure historical detail, bringing life to each character. Philippa Gregory does a masterful job of taking what is known as recorded fact, and drawing logical assumptions about the personalities of the characters involved.

More summaries and resources for teaching or studying The Other Boleyn Girl.

The Other Boleyn Girl from BookRags. (c)2022 BookRags, Inc. All rights reserved.