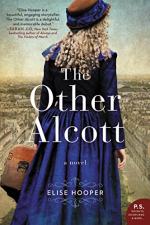 The Other Alcott Summary & Study Guide

Hooper, Elise
This Study Guide consists of approximately 72 pages of chapter summaries, quotes, character analysis, themes, and more - everything you need to sharpen your knowledge of The Other Alcott.

The Other Alcott Summary & Study Guide includes comprehensive information and analysis to help you understand the book. This study guide contains the following sections:

This detailed literature summary also contains Quotes and a Free Quiz on The Other Alcott by Hooper, Elise.

The following version of this book was used to create this study guide: Hooper, Elise. The Other Alcott. New York: HarperCollins Publishers, 2017.

The novel is broken into four parts but for the purposes of this guide, the chapters are grouped together within the parts. The story is told from May Alcott’s third person perspective. It is a historical fiction novel though it is based on a real woman, Abigail May Alcott Nieriker. The novel, starting in 1868 and ending in 1880, explores May’s life of figuring out her path, while competing with both a famous sister and a sexist culture that inhibits women from becoming professional artists.

Before Part 1 starts, Hooper includes a letter written from May to Louisa dated 1878 that expresses May’s frustration with her sister, and mentions a gift from Louisa. Part 1 takes place from October 1868 - June 1869 starting in Concord. In Chapter 1, Louisa receives fantastic reviews for her novel Little Women, but critical reviews of May’s illustrations. In Chapter 2, May goes for a horseback ride with her beau Joshua and thinks about the unfair choice she might have to face about having a career or a family. In Chapter 3 May asks Louisa if she can move to Boston and take art classes. In Chapter 4, May and Louisa attend the Bishop’s Christmas Ball and May meets Alice who tells her about art classes she is taking in Boston.

Chapter 5 starts with a letter from Louisa saying she has an apartment ready. May goes for a sleigh ride with Joshua in which he tries to talk her out of taking art classes, but they end up crashing in the streets of Boston. In Chapter 6 May starts taking her art classes with Dr. Rimmer, and she becomes friends with Alice Bartol. In Chapter 7 May meets Joshua’s sister Nellie, as well as Jane Gardner a new acclaimed artist, who tells her she must go to Paris. In Chapter 8 May endures an awkward dinner with Joshua’s family. Chapter 9 ends Part 1 with May breaking up with Joshua, and talking to Alice about future plans.

Chapters 10 - 13 start Part 2, including the years 1870 - 1873 in Europe. Chapter 10 starts as Alice, Louisa, and May are on a ship to France. In Chapter 11 war forces Louisa and May to go to Rome. In Chapter 12 they have moved to Rome, and learn that their sister’s husband has died, but they decide to stay. In Chapter 13 May meets with a famous woman artist and argues with Louisa about her character Amy in Little Women. In Chapter 14 May meets and starts taking art lessons from Frederic Crownover. In Chapter 15 they start painting nude female models, and she starts to have romantic feelings towards him. In Chapter 16 she attends an all-male painting session of a male nude model, and realizes Crownover (though married) has romances with other men. In Chapter 17 May returns to Concord to take care of Anna and her children. In Chapter 18 she applies for William Hunt’s art school in Boston. In Chapter 19 May starts art school with Mr. Hunt and finds it very challenging, but rewarding. In Chapter 20 there is a huge fire throughout Boston that burns down Mr. Hunt’s studio. In Chapter 21 May returns to Concord as her classes are canceled. Her nephews and sister get very sick in the winter weather, and Anna barely survives. Part 1 ends as Louisa comes to Concord to help with Anna’s recovery.

Part 3 is April 1873 - August 1877, beginning in in London. In Chapter 22, May has moved to London and meets the Keith couple. In Chapter 23 she begins making copies of Turner at the National Gallery and starts selling them. In Chapter 24 May has to return home to take care of Marmee. In Chapter 25, May decides she must get back to Europe. In Chapter 26 she leaves for Paris, but Louisa is not there to see her off. In Chapter 27 May starts taking art lessons in Paris, moves in with Alice, and meets Mary Cassatt. In Chapter 28 May and Alice submit paintings for the art Salon. In Chapter 29 May is accepted to the Salon but Alice is not, and Alice decides to return to Boston. In Chapter 30 May shows her art at the Salon and runs into Jane Gardner. In Chapter 31 May and Jane have gone to Grez for the summer and Part 3 ends with Jane considering her next steps.

Part 4 is October 1877 - September 1880 beginning again in London. In Chapter 32 May receives a letter from Louisa telling her Marmee is very ill; a few days later she receives another letter that Marmee has died. In Chapter 33 May is grieving, and stands up for a poor woman in a church. In Chapter 34 May meets Ernest Nieriker and in Chapter 35 they develop a romance. In Chapter 36 they get married and move to France, while Louisa is not approving. In Chapter 37 May receives a check as a wedding present from Louisa but does not cash it. In Chapter 38 May decides to take art lessons in Paris again, telling Ernest she will pay for classes by selling more art. In Chapter 39 May starts art classes and Ernest announces his parents will visit. In Chapter 40 the Nierikers visit, Ernest has a business deal go bad, and May finishes her painting La Negresse. In Chapter 41 May’s painting is accepted into the Salon of 1879 and she attends the exhibit. She also learns that she is pregnant. In Chapter 42 May starts to work on a book for women traveling in Europe. In Chapter 43 May learns her book will be published, with help from Louisa, and she gives birth to a baby girl. In Chapter 44 Louisa receives the new baby in Boston, as May has died.

More summaries and resources for teaching or studying The Other Alcott.

The Other Alcott from BookRags. (c)2022 BookRags, Inc. All rights reserved.