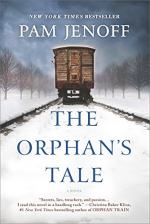 Pam Jenoff
This Study Guide consists of approximately 34 pages of chapter summaries, quotes, character analysis, themes, and more - everything you need to sharpen your knowledge of The Orphan's Tale.

The Orphan's Tale: A Novel Summary & Study Guide includes comprehensive information and analysis to help you understand the book. This study guide contains the following sections:

This detailed literature summary also contains Quotes and a Free Quiz on The Orphan's Tale: A Novel by Pam Jenoff.

The following version of this book was used to create this study guide: Jenoff, Pam. The Orphan’s Tale. MIRA Books. 2017.

The Orphan’s Tale is an historical novel by Pam Jenoff which follows the struggles of sixteen year-old Noa and the Jewish Astrid as they attempt to survive World War II by hiding and performing in the Circus Neuhoff. Noa, originally from Holland, was kicked out of her home by her parents after they discovered she had had a sexual relationship with a German soldier by whom she became pregnant. After the baby was taken away from her in the Lebensborn Program, a heartbroken Noa went on to live and work at a train station in Germany. In the present, she rescues a Jewish baby boy from a train full of Jewish babies and escapes.

Noa and the baby, whom she names Theo, take shelter with the Circus Neuhoff. There, they come under the wing of Astrid, who is secretly a Jew named Ingrid. Many years before, Ingrid was married to a German officer named Erich. Ingrid and Erich were divorced when the Reich demanded all German officers with Jewish wives to do so. Now in the present, Astrid works as an aerialist for the Circus Neuhoff, and she is dating Peter, who portrays a clown who mocks Nazis. Noa is trained by Astrid to work in the circus as an aerialist. In the spring of 1944, the Circus Neuhoff breaks winter quarters for a French tour.

The circus comes to the town of Thiers, the first stop on the tour. There, Noa meets and falls in love with the Mayor’s son, Luc. Astrid warns Noa against such a relationship as the Mayor is cooperating with the Germans. Astrid is horrified and heartbroken when the Germans arrest Peter for his act. When the Mayor refuses to intervene, Luc leaves home and decides to join the French resistance. When Herr Neuhoff attempts to intervene, he dies almost instantly as a result of a weak heart condition. Control of the circus now passes to Emmet, Neuhoff’s disappointing son.

Emmet plans to cut the tour short, fire half the workers, and find a way to disband the circus. Meanwhile, word comes that Astrid’s brother has safely made it to America and is prepared to have her join him there. Erich has set up a bank account with money for Astrid to make the trip possible. Noa decides she will run away with Luc to join the resistance, but Luc does not show up at the appointed meeting time. Heartbroken, Noa returns to the circus to find the main tent on fire. She helps to save Astrid, but Noa is caught in the collapse of the tent herself. In her dying breath, Noa urges Astrid to take Theo and leave for America. Astrid does as requested.

Years later, the aged Astrid journeys to Paris to see a circus exhibit. She has spent her life attempting to better understand the past. Over the years, she learned that Peter was killed at Auschwitz, and Erich was killed in a bombing raid. She also learns that Luc was killed in a German attack, which is why he never kept the meeting with Noa. Astrid’s two children –Theo, and Petra (whom she had by Peter) –follow her to Paris to make sure she is alright. Then, they bring her home.

More summaries and resources for teaching or studying The Orphan's Tale: A Novel.

The Orphan's Tale: A Novel from BookRags. (c)2022 BookRags, Inc. All rights reserved.