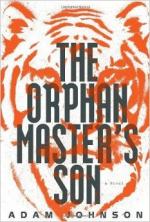 The Democratic People's Republic of Korea is the country where the majority of the story takes place.

Pyongyang is the capital of Korea. It is to where all the pretty girls in the country, and other countries, and kidnapped and taken.

Long Tomorrows is the name of the orphanage where Jun Do's father becomes orphan master after his wife disappears.

Each home and business in Korea is outfitted with mandatory loudspeakers. These speakers broadcast Korean news and propaganda all day long.

Chongjin is the town in which Long Tomorrows, the orphanage at which Jun Do's father was master, was located.

The Roster of the 114 Grand Martyrs of the Revolution

When Jun Do returns to the abandoned Long Tomorrows, all that is left is the roster of the 114 grand martyrs of the revolution. Jun Do had used this...