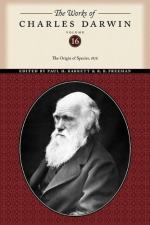 On the Origin of Species Summary & Study Guide

Charles Darwin
This Study Guide consists of approximately 72 pages of chapter summaries, quotes, character analysis, themes, and more - everything you need to sharpen your knowledge of On the Origin of Species.

On the Origin of Species Summary & Study Guide Description

On the Origin of Species Summary & Study Guide includes comprehensive information and analysis to help you understand the book. This study guide contains the following sections:

This detailed literature summary also contains Topics for Discussion and a Free Quiz on On the Origin of Species by Charles Darwin.

The Origin of Species is an extended argument for the belief that species that are now living were not created independently by God, but evolved from other, past species through the process of natural selection. The text of the book is divided into two purposes: first, explaining what natural selection is and how it could produce species; second, responding to the objections of those who do not agree with it.

The book opens with an introduction that provides an outline of the book and its general purpose. The first chapter discusses how plants and animals exhibit variations in physical traits and behavior when kept domestically and how breeders use these variations to improve their stock. The purpose of this chapter is to provide an analogy to how nature gradually changes and improves forms of life living in the wild. For the analogy to work, however, variations must also occur in nature, and proving this is the purpose of the next chapter. Now, all forms of life are engaged in an endless struggle for existence with one another. This is the result of two facts: all organisms reproduce very rapidly and there are far too few resources to support all of them. Therefore, only the strongest organisms that are best adapted to the circumstances in which they live will be able to survive and reproduce. This also implies that when an organism is born with a variation that gives it some advantage in surviving (or reproducing) that it will, by that fact, have a greater chance of surviving, reproducing, and passing on that trait. This is known as the process of natural selection, whereby helpful variations are gradually accumulated. Over time, natural selection can greatly modify organisms to such a point that they no longer belong to the same species, and this is how all species came to be.

However, many objections can be and have been raised against this. For example, if one species descends from another species through a series of small, gradual steps, why are there not existing creatures that show all of these small steps? The answer to this objection is that the very process of natural selection assumes that the weakest organisms die out and become extinct. While the variations which some creatures developed gave them an advantage in surviving, since resources must be competed for, they must also have put other creatures at a disadvantage, particularly those creatures which were not as well adapted to their circumstances, such as their parent-species. As a result, they went extinct. Certain complex traits of organisms also seem difficult to explain through natural selection, like an organ as complex as the eye or behavior as complex as hive-building. However, these objections are based mainly on the limits of imagination and not on any sold scientific basis.

While many objections can be raised, and some even appear very serious, there is a lot of positive evidence for the theory of natural selection, such as evidence found in the similarities between related but still very distinct organisms, such as humans and dolphins. Similarities of this kind are difficult to explain on the belief that God created the dolphin and man independently, but easy to explain if it is believed that both descended from a common ancestor.

Natural selection does not at all diminish the role of God in creating the world, but rather elegantly places his role at the beginning in creating life and then allowing it develop into the many forms of life which exist today.

More summaries and resources for teaching or studying On the Origin of Species.

On the Origin of Species from BookRags. (c)2022 BookRags, Inc. All rights reserved.