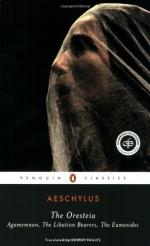 Aeschylus
This Study Guide consists of approximately 46 pages of chapter summaries, quotes, character analysis, themes, and more - everything you need to sharpen your knowledge of The Oresteia.

The Oresteia Summary & Study Guide includes comprehensive information and analysis to help you understand the book. This study guide contains the following sections:

This detailed literature summary also contains Topics for Discussion and a Free Quiz on The Oresteia by Aeschylus.

This trilogy of plays, written a number of years B.C.E., dramatizes one of the earliest, most culturally significant myths of Ancient Greek civilization—how a series of revenge/power-motivated murders in the family of King Agamemnon of Mycenae eventually leads to the establishment of democratic (as opposed to natural) justice. One of the few surviving complete examples of Classical Greek drama, the trilogy is populated by archetypal characters, whose actions explore themes relating to the nature and purpose of revenge, and the relationship between humanity and spirituality (the gods).

The Oresteia is set several years after the Trojan War, in which Agamemnon, the King of Mycenae and a general in the Greek army, fought alongside other Greek kings/generals to destroy the city of Troy. They were seeking revenge on Paris, a prince of Troy, for his having kidnapped Helen, the beautiful wife of Menelaus, another king/general. As they attempted to sail for Troy, the Greek armies found there was no wind. Agamemnon was then told by the goddess Artemis that the only way he could get a favorable wind was to sacrifice his daughter to her. Guilt ridden, Agamemnon nevertheless did as the goddess told him—and in doing so, triggered the wrath of his wife Clytemnestra, who, while he was at war, plotted revenge of her own.

The first play of the trilogy, titled Agamemnon, takes place several years after these events. Clytemnestra has been vengefully plotting Agamemnon's death the entire time he's been away and has begun an adulterous relationship with Aegisthus, a kinsman of Agamemnon's (who has his own reasons for taking revenge on the king). When Agamemnon finally returns, bringing a captured Trojan princess with him as a mistress, Clytemnestra puts her plans into action. She seduces Agamemnon into believing that he is welcome and that all at home is well, but as he's taking a bath she slaughters him with an ax. Shortly afterwards, she kills the Trojan princess. As Aegisthus attempts to take the credit for what they did, Clytemnestra urges him to speak calmly, saying now that their long-troubled kingdom can now live in peace.

The second play of the trilogy, The Libation Bearers, takes place several years after the events of the first play. Orestes returns home from exile with the intent of taking revenge for his father's murder. He encounters his embittered, grieving sister Electra, who encourages him to kill both Clytemnestra and Aegisthus. Orestes puts a plot in motion, lures Aegisthus to a humiliating death and, after an intense confrontation with Clytemnestra, kills her as well. He declares the trials of his family to be at an end, but then discovers that he's being pursued by the Eumenides, ancient goddesses of natural justice who consider what he's done (a son killing his mother) to be the most heinous of all crimes. Orestes flees, and the Eumenides pursue him.

The third play of the trilogy, The Eumenides, also takes place several years later. The pursuit of Orestes has brought both him and the Eumenides to the point of desperate exhaustion. Orestes cries out to the god Apollo for guidance. The god appears and tells him to seek justice at the temple of Athena, the goddess of justice, in Athens. Orestes travels to Athens, still pursued by the Eumenides. Athena herself appears, listens to their respective stories and creates a panel of human judges (the Aeropagus) to hear and judge the case. When the vote of the Aeropagus turns out to be a tie, Athena casts the final vote—in favor of Orestes, who is freed from the torturous pursuit of the Eumenides. He proclaims his intention to live out his days peacefully and then leaves. Athena persuades the Eumenides to accept a less vicious and hostile place in the pantheon of the gods and in the process of seeking justice and then names the Aeropagus as her earthly representatives, the embodiment of ultimate human justice in the world.

More summaries and resources for teaching or studying The Oresteia.

The Oresteia from BookRags. (c)2022 BookRags, Inc. All rights reserved.