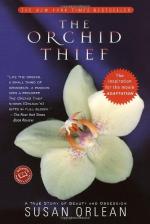 This detailed literature summary also contains Topics for Discussion and a Free Quiz on The Orchid Thief by Susan Orlean.

The Orchid Thief by Susan Orlean is a story about the world of orchid growing and collecting, its history and the people who are involved in this form of collecting. Susan reads a newspaper clipping about a man named John Laroche and three Seminole Indians who have been accused of stealing orchids from the Fakahatchee Strand. She is intrigued when she reads the story and decides to investigate the situation further.

Susan meets John Laroche and attends his courtroom hearing with the Seminole Indians. While interacting with him, she finds one of the most eccentric, obsessive people that she has yet to come across. Of course, Laroche believes he is the smartest person he knows. Laroche introduces Susan to the world of orchid collecting. It seems that when someone begins to have an attraction to orchids, it will oftentimes become an obsession and they will have an expansive collection of rare and unusual orchids from around the world. Orchids are mutated and grown by collectors in a commercial environment. When an orchid grower successfully creates a new hybrid of the flower, they have a seven year monopoly on the hybrid since it takes the flower seven years to bloom. In the meantime, a grower can have a successful career.

Laroche had been determined to take wild orchids out of the Fakahatchee Strand through the help of Seminole Indians, who are permitted to remove wild things from the preserve. The Fakahatchee Strand is an unusual place filled with living creatures in a unique swamp atmosphere. Susan travels there and hikes throughout the grounds to get a better feel for the environment where orchids flourish in the wild. In addition, she covers the history of the swamp itself and discusses how living creatures flourish in Florida with its one-of-a-kind support system for plants and animals.

Susan meets a number of famous orchid growers and collectors as she researches the history and draw of orchids. Martin Motes, Bob Fuchs and Tom Fennell are just a few of the important and influential orchid growers with whom she meets. She tours their nurseries and attends the orchids shows. All along the way, she hopes to see a ghost orchid in bloom. Despite a number of close calls, she never manages to see one and closes the book by saying that she prefers to not see one now since the idea of it is far too large in her mind.

Laroche is ultimately convicted of his plant crime and fined; he is also exiled from the Fakahatchee Strand for a year. On his release, Susan convinces him to hike the Fakahatchee with her for one last attempt to see a ghost orchid, but instead they end up lost in the wild, hiking their way out after hours and she never sees her orchid.