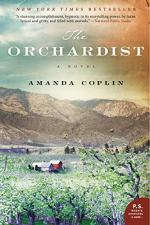 Amanda Coplin
This Study Guide consists of approximately 45 pages of chapter summaries, quotes, character analysis, themes, and more - everything you need to sharpen your knowledge of The Orchardist.

The Orchardist Summary & Study Guide includes comprehensive information and analysis to help you understand the book. This study guide contains the following sections:

This detailed literature summary also contains Quotes and a Free Quiz on The Orchardist by Amanda Coplin.

“The Orchardist” is a historical novel by Amanda Coplin set between the 1890s and early 1900s in the Pacific Northwest where an orchard owner attempts to care for two young runaway teenage prostitutes and their baby. The man who owns and largely operates the orchard, William Talmadge, is a many of forty who has led a difficult life. His father was killed in the 1850s in a mining accident. Talmadge, his mother, and his sister moved to the land near the town of Cashmere, Washington afterwards. There, they begin orchards. Talmadge’s mother dies, after which Talmadge nearly dies of smallpox, followed by his sister’s sudden disappearance. Lightly disfigured and prematurely aging, Talmadge revels in the tranquility and solitude of his orchards.

One day, two pregnant girls in their early teens show up at the property. Talmadge begins leaving food for them, and fixes up an old cabin for them. In town, he learns their names are Della and Jane, and a man named Michaelson is looking for them. Very slowly, the girls become trusting of Talmadge, though they keep their distance. Talmadge asks his friend and midwife, Caroline Middey, to examine the girls. Talmadge himself tracks down Michaelson near a town called Ruby City, where he runs a brothel which includes even children. Michaelson himself is an opium addict. Talmadge is disgusted and returns home.

Jane and Della both give birth. Della’s baby does not survive. Jane’s baby does. Talmadge helps to nurse both girls back to health. When Michaelson comes looking for the girls with two armed men, Jane and Della attempt suicide by hanging from an apple tree. Jane is successful; Talmadge catches Della before she can fall all the way. Talmadge then pays Michaelson for the girls. Michaelson and his thugs leave, and Talmadge buries Jane. Della struggles thereafter with being a mother to the baby girl, whom she decides to name Angelene after one of Talmadge’s sisters.

When Della ultimately offers herself sexually to Talmadge, Talmadge respectfully and gently declines. Della becomes obsessed with the horses that are brought onto the property each year by a group of Indians Talmadge has been friends with for years. The Indians are horse-wranglers and thieves, and they help Talmadge tend to his orchards during harvest in exchange for use of his land. Della decides to travel with the Indians to auction each year, even though Talmadge opposes this. He is worried about being too strict and forbidding with Della after everything Della has been through.

Finally, Della stops returning to the orchard. Years pass. Talmadge feels as if he has lost his sister all over again. He becomes the primary caregiver for Angelene. As Della travels around, taking on work beyond horses, she drunkenly stabs a man during a card game at a lumber camp. While in the town of Chelan, she learns that Michaelson is in jail. She turns herself in for the stabbing, claiming to have killed the man. She desires to get close to Michaelson in jail in order to kill him. It becomes her purpose.

Talmadge learns of Della being in jail. By now, Angelene is fourteen and learns of Della and her past. Though Angelene understands Della’s past must have been difficult, she cannot forgive Della for abandoning Talmadge and the orchards. Talmadge works to get Della freed from jail, but Della continues to resist all attempts. When Talmadge concocts a plan to help Della escape, Della refuses. She and Talmadge are both captured before the attempt can even be made. Talmadge is sentenced to three years in jail, but is let out after fourteen months for good behavior, publicity around the reasons for the escape, and because he is caring for a minor girl. Della is given ten years.

Angelene, meanwhile, has kept company with Caroline, and tended to the orchards. Angelene understands the orchards are home. When Talmadge returns home, they both return to orchard-tending. As the years pass, Talmadge ages faster, growing weaker and less capable. Angelene begins caring for Talmadge, continuing to do so until he dies. She gives Della the news in jail. Della reveals Michaelson has died on his own. Angelene herself remains in the orchard until the age of twenty-five. She returns twice to visit. Both times, the orchards are run-down and are not kept up with by their current owners. Angelene sometimes dreams of Della, Jane, and Talmadge happily living in an orchard in Heaven, and knows they will be waiting for her to one day join them.

NOTE: Due to the structure of this novel, this study guide specifically refers to the 2012 Harper Perennial Paperback edition of “The Orchardist” by Amanda Coplin. The study guide is divided into sections according to page numbers in that edition, and the quotes are noted accordingly.

More summaries and resources for teaching or studying The Orchardist.

The Orchardist from BookRags. (c)2022 BookRags, Inc. All rights reserved.